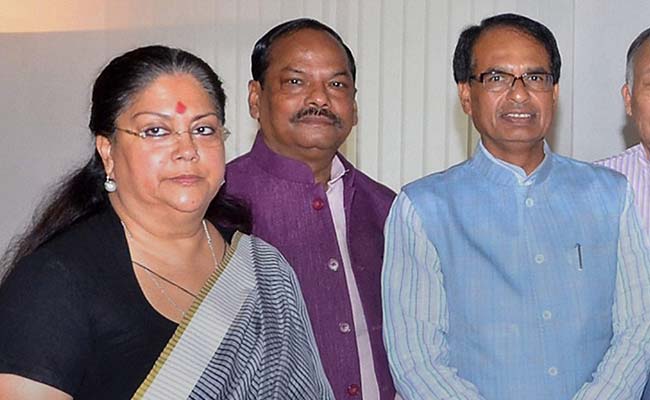 New Delhi: Embattled Rajasthan Chief Minister Vasundhara Raje has returned to Jaipur after a short visit to Delhi on Saturday morning to attend a meeting of NITI Aayog, amid demands from the opposition for her resignation over her links with tainted cricket boss Lalit Modi.

Raje, who came to Delhi in a helicopter on Saturday morning, returned without meeting any BJP leader.

Raje’s visit came a day after the central leadership of her party backed her, after holding out on voicing its support for days.

The Rajasthan BJP has refuted all allegations against her, saying the document which she signed in support of Modi’s immigration application to the UK government was never produced in court as she had backed out of it later.

Earlier,Â Raje had been given a clean chit after the BJP reviewed the documents submitted by her in Lalit Modi controversy, sources said.

Alongwith Raje, the government is also believed to have deemed satisfactory documents presented by Raje’s son Dushyant Singh and it is believed that the papers prove that deal between Singh and Lalit Modi was legal.

The Rajasthan unit of the BJP also came out in open support for the embattled Chief Minister who herself rubbished reports about a signature campaign by her to demonstrate backing of 120 MLAs.

Earlier, BJP national secretary Siddharth Nath Singh had said that his party cannot Â take action against Raje merely on the basis of documents provided by an absconder.

“If the person who is accused, is served with ED notices and is considered an absconder gives a document on the basis of which the BJP is expected to react, then I am sorry it is very difficult for the party,” Singh said.

Singh also took a dig at Lalit Modi’s claim that he had “run into” Priyanka Gandhi and her husband Robert Vadra in London.