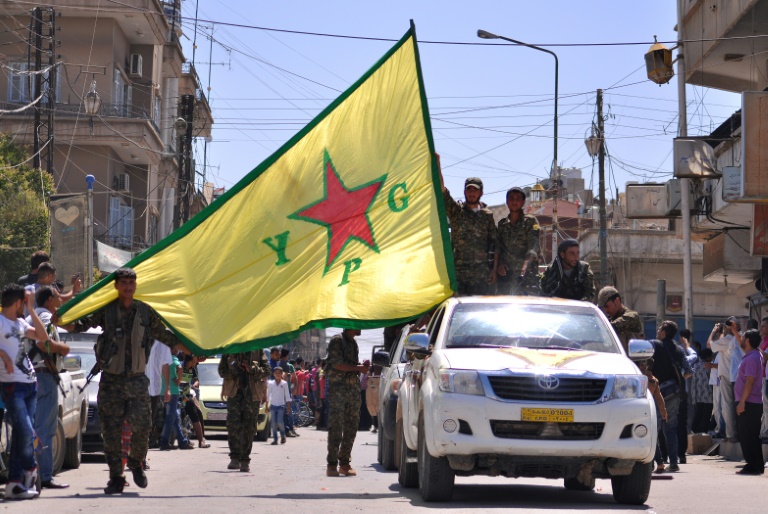 Kurdish forces drove Islamic State group fighters from the flashpoint Syrian border town of Kobane on Saturday, after a killing spree by the jihadists left more than 200 civilians dead.

As they combed the streets for fugitive jihadists, the Kurds found more bodies, taking the civilian death toll to 206, the Syrian Observatory for Human Rights said.

The jihadists made their last stand in a boys’ high school.

“The YPG detonated explosives outside of the school, then stormed it,” Amin said, speaking via the Internet from near Kobane on the border with Turkey.

“This military operation was carried out after ensuring that there were no civilians left in the school.”

Amin said he believed all the IS militants inside were killed.

The jihadists had entered Kobane at dawn on Thursday disguised in YPG uniforms and seized several buildings in the town’s south and southwest.

The YPG quickly surrounded the jihadist positions, but it took two days to re-establish control.

Some civilians were killed in the streets by rocket or sniper fire, and others were executed in their homes.

“The bodies were found littered in homes and in the streets, lying here and there,” he said.

The toll included at least 180 civilians killed in Kobane itself, and another 26 executed in a nearby village.

At least 300 people were wounded.

The IS operation was widely seen as vengeance for a series of defeats at the hands of Kurdish militia, particularly the jihadists’ loss of Tal Abyad, another border town further east, on June 16.

“IS doesn’t want to take over the town. They just came to kill the highest number of civilians in the ugliest ways possible,” local journalist Mostafa Ali told AFP on Friday.

A total of 16 Kurdish fighters and 54 jihadists were also killed.

The Observatory chief said that IS had achieved its objective.

“You cannot call this last operation a real defeat for IS, because it did what it wanted to in Kobane,” Abdel Rahman said.

In January, Kurdish forces backed by rebel groups and US-led air strikes pushed IS out of Kobane after four months of fierce fighting in a hugely symbolic defeat for the jihadists.

Further east, government forces launched a counter-attack Saturday against IS in the provincial capital of Hasakeh, on the third day of intense clashes.

The fighting largely took place in the southern Hasakeh, where IS seized two neighbourhoods on Thursday.

The UN estimated that “90,000 people have been displaced, many pre-emptively, to the eastern and northern neighbourhoods of the city… as well as to nearby villages”.

It said another 30,000 people had fled further north and northeast to other cities and towns in Hasakeh province.

Kurdish units, who share control of the city with government forces, joined the fighting late on Friday and banned civilians from the streets.

IS also tried to seize Hasakeh last month, but was pushed back by government forces.

On Friday, Information Minister Omran Zohbi called on “anyone who is capable of carrying a gun” to join the fight against IS in Hasakeh.

“Protecting the city of Hasakeh from the terrorist takfiri (extremist Sunni) attacks is a duty shared among all the sons of the city,” Zohbi said.

In the southern city of Daraa, fighting continued between government forces and rebel groups including Syrian Al-Qaeda affiliate Al-Nusra Front.

Since Thursday, 60 rebels, 18 government loyalists and 11 civilians have been killed in the fighting.