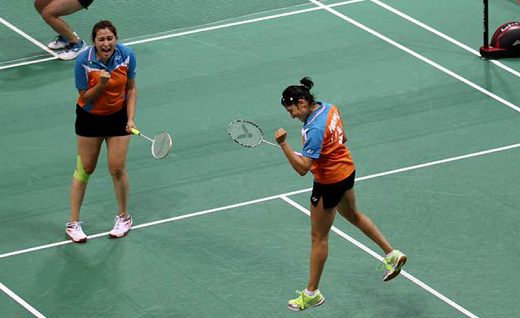 The third seeds Indian pair will next take on Japan’s Shiho Tanaka and Koharu Yonemoto. The 2010 Commonwealth Games gold medallists Jwala and Ashwini had reached the semifinals of US Open Grand Prix Gold last week to attain their career-best ranking of World No. 13.

Among other Indians, B Sai Praneeth and Ajay Jayaram bowed out of the quarterfinals in the men’s singles event, while women’s doubles pair of Pradnya Gadre and N Sikki Reddy also suffered a loss.

The 22-year-old Praneeth, seeded 10th, went down fighting 13-21 21-18 11-21 to two-time silver medallist at Olympics and former World No. 1 Lee Chong Wei. It was his second successive loss to Lee in two weeks after losing to the Malaysian at the US Open semifinals.

In women’s doubles, Pradnya and Sikki produced a gallant fight but it ended with a heartbreaking 18-21 25-23 15-21 loss to Poon Lok Yan and Tse Ying Suet.