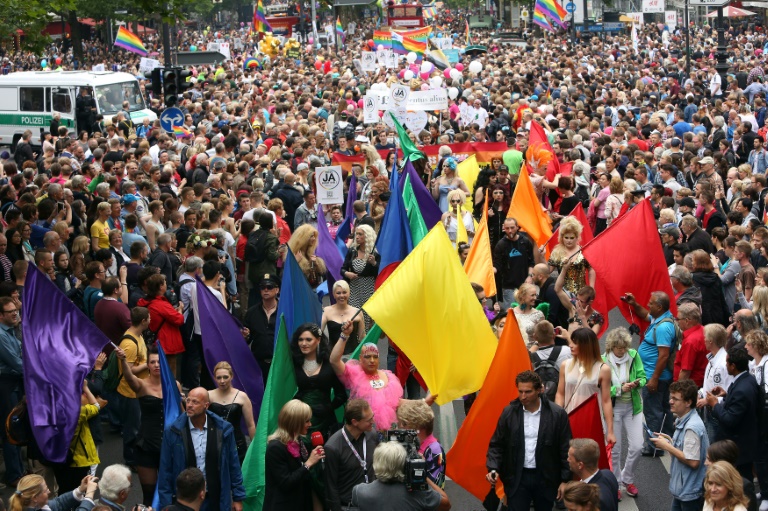 Several hundred thousand people filled the streets of Berlin for the city’s Gay Pride parade on Saturday, a day after the US Supreme Court legalised same-sex marriage nationwide.

The crowds were a riot of colour under grey skies, with many demonstrators in costume — including US embassy staffer Tim Standaert, who painted his torso blue with an enormous red heart as he waved a rainbow-hued Stars and Stripes flag.

“We are all different, we are all the same,” was the theme of this year’s march, which comes a day after the landmark Supreme Court ruling that all 50 US states must carry out and recognise same-sex marriages.

Germany introduced civil unions for gay and lesbian couples in 2001, but they do not have the right to marry and are still also forbidden from jointly adopting children.

Earlier this month the upper house of the German parliament adopted a resolution calling for the legalisation of same-sex marriage, which is opposed by Chancellor Angela Merkel’s conservatives.

Saturday’s pride march was a typically festive affair, with lashings of sequins, fake eyelashes, wigs and feather boas, rainbow flags, and even one reveller who appeared to have dipped his penis in gold paint.

“A day without lesbians is like a day without sunshine,” read one placard that seemed especially fitting for the miserable weather.

The parade came as tens of thousands of revellers also gathered in Dublin for the Irish capital’s pride event, a month after that country became the first in the world to vote by referendum in favour of legalising gay marriage.