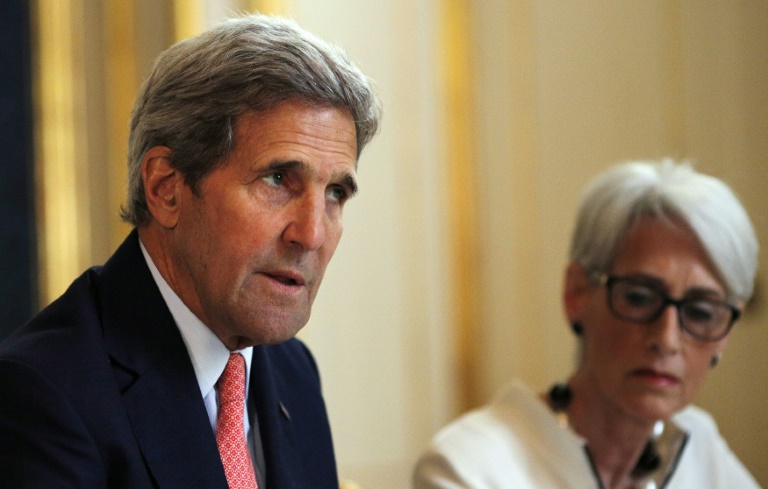 Top diplomats warned Saturday of “hard work” ahead to seal a nuclear deal with Iran, as France insisted three key conditions to put an atomic bomb out of Tehran’s reach still had to be met.

US Secretary of State John Kerry and Iran’s Foreign Minister Mohammad Javad Zarif met first in Vienna, for what is set to be the final push for an accord after almost two years of negotiations.

“We’ve a lot of hard work to do,” Kerry told reporters at the start of the talks in a luxury hotel in Vienna, with a June 30 deadline looming.

“There are some very tough issues, and I think we all look forward to getting down to the final efforts here to see whether or not a deal is possible.”

But he said he remained “hopeful,” adding: “I think everybody would like to see an agreement.”

Zarif agreed negotiators “need to work really hard in order to be able to make progress and move forward”.

“We are determined to do everything we can to be able to make this effort possible. Of course, that depends on a lot of things and we’re going to work on it,” Zarif added.

Officials have acknowledged the deadline may slip by a few days, and diplomats say the mooted accord finalising a framework deal agreed in April in Lausanne, Switzerland is far from done.

“We want a robust accord that recognises Iran’s right to a civilian nuclear programme, but which guarantees that Iran renounces definitively nuclear weapons,” he said.

“We believe there are at least three indispensable conditions.”

Fabius stressed there must be “a lasting limitation of Iran’s nuclear capacities in research and production” as well as rigorous inspection of military sites, and a mechanism to quickly reimpose sanctions.

It is hoped a deal would end a standoff dating back to 2002 that has threatened to escalate into war and poisoned the Islamic republic’s relations with the outside world.

Even if negotiators manage a deal, it will be closely scrutinised by hardliners in Iran and the United States, as well as Iran’s regional rivals Israel, widely assumed to have nuclear weapons itself, and Saudi Arabia.

According to the Lausanne framework, Iran will slash by more than two-thirds its uranium enrichment centrifuges, which can make fuel for nuclear power or the core of a nuclear bomb, and shrink its uranium stockpile by 98 percent.

Iran also agreed to change a planned reactor at Arak so that it cannot produce weapons-grade plutonium and no longer to use its Fordo facility — built into a mountain to protect it from attack — for uranium enrichment.

In return it is seeking a lifting of EU, US and UN sanctions which have choked its economy and limited access to world oil markets.

But on Tuesday Iran’s supreme leader, Ayatollah Ali Khamenei, set out key “red lines” for the final agreement that appeared to go against parts of what was agreed in Lausanne.

These included the timing of sanctions relief and UN access to military bases, needed to investigate claims of past bomb-making efforts and to probe any future suspicious activity.

Arms Control Association analyst Kelsey Davenport said although the comments were “unhelpful, they are unlikely to derail the talks”.

It “is important to remember that Khamenei’s ‘red lines’ have shifted over time and he has made statements in the past that were not always reflected in the outcomes of the negotiations,” she said.

Fabius was due to hold separate talks with Kerry later Saturday, with EU foreign policy chief Federica Mogherini set to arrive in Vienna on Sunday.

Negotiators cannot extend the talks too long since under new US legislation Congress must receive a copy of the draft by July 9, otherwise lawmakers will have 60 days to review and vote on the deal instead of 30.