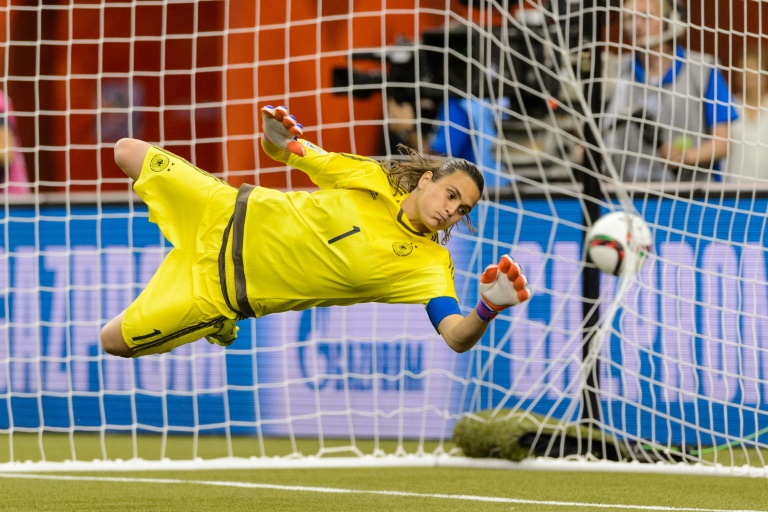 Top-ranked Germany kept their bid for a record third title on track Friday when they won a dramatic penalty shoot-out 5-4 to break French hearts and advance to the semi-finals at the Women’s World Cup.

The thrilling quarter-final game at Montreal’s Olympic Stadium went to a nail-biting penalty shoot-out after the two teams were locked 1-1 after 30 minutes of extra time.

Louisa Necib, dubbed the “Female Zidane” of the French women’s game, could only rue a missed chance to score after just 49 seconds, before she finally nailed the opener on 64 minutes.

Celia Sasic levelled for Germany with a penalty six minutes from time, and in a tense half hour of extra-time substitute Gaetane Thiney wasted a late chance to put France into the last four for the second straight time.

Germany captain Nadine Angerer was the heroine of the night as the goalkeeper saved 20-year-old substitute Claire Lavogez’s final penalty in the shoot-out.

“We’re extremely elated, full of adrenaline right now,” said the 36-year-old former world player of the year, who has won titles with Germany in 2003 and 2007.

“It was hard work. We had to fight really hard and we were rewarded.”

Germany coach Silvia Neid admitted it was a tough game.

“We had to run after it and France were really ahead of us in the first half. But in the second half we really fought hard.

“Our team has proven their character, they managed to flick that switch in the second half and then to get a penalty shoot-out where you have the goalie who can hold those penalties.”

France had dominated early on front of an enthusiastic crowd of just under 25,000 in the largely French-speaking city of Montreal.

Necib missed an early golden chance within the first minute, when Elodie Thomis crossed only for the midfielder to fire wide of Angerer’s right-hand post.

Both sides missed a string of chances in the first half with Sasic and Marie Laure Delie both heading over the crossbar, with Necib coming close a second time but Angerer tipped it round the post.

As Neid prowled the sidelines barking orders her team upped their game in the second half.

Dzsenifer Marozan was brought on in place of an invisible Anja Mittag after the break and her presence hurt the French along with the exit of Thomis following a leg knock.

Germany’s Sasic from open play and then substitute Marozsan from a free-kick threatened but Sarah Bouhaddi was solid in the France goal.

The breakthrough finally came after 64 minutes when Necib picked up the ball from the edge of the box firing into the net through a deflection off Germany defender Annike Krahn.

But Sasic equalised when she converted a harsh penalty awarded on 84 minutes when France’s Amel Majri was judged to have handled Leonie Maier’s cross into the French penalty area.

It was the sixth goal of the tournament for forward Sasic.

“I don’t know if there was a handball or not but there were calls which went against us,” said France captain Wendie Renard.

“The German coach brought on midfielders to practically put in four strikers. They threw everything at us. We lost on little details.

“We can hold our heads up high and say we gave it everything we had. Obviously there are regrets.”

France coach Philippe Bergeroo added: “Everyone keeps telling me how well we played, but we lost.

“It’s a great, great disappointment. We can only blame ourselves, we couldn’t use the chances we had.”

Les Bleues will now have to wait until the 2016 Rio Olympics for another shot at a first title.

Germany, winners in 2003 and 2007, who were shocked in the quarter-finals of their home tournament in 2011, live to fight on and next play either the United States or China for a place in their fifth final.