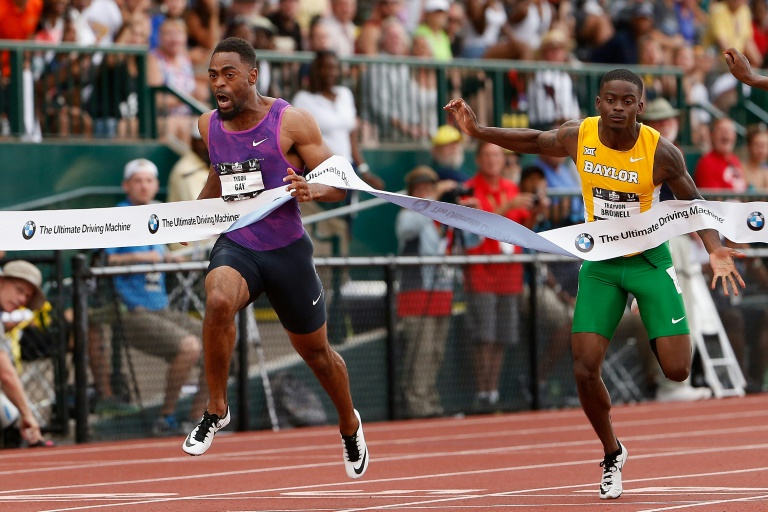 Tyson Gay powered past teenaged challenger Trayvon Bromell to win the US 100m crown in 9.87sec and book his first trip to the World Championships since 2009.

Gay, 32 and trying to regain the sport’s summit after a one-year drugs ban, rated the triumph as perhaps the most important of his career.

“I feel like it was the toughest,” he said, noting that rising talents like Bromell were raising the stakes in US sprinting.

He credited his veteran skills with getting him through the rounds with enough left to overhaul the 19-year-old Bromell, relegating him to second in 9.96.

“He got out good, it was just one of those 10-years-of-experience, dig-down moments — I had to get him,” Gay said. “It felt good though.”

Mike Rodgers was third in 9.97 to grab the final berth on offer for the August 22-30 World Championships in Beijing.

They’ll join teammate Justin Gatlin, who has a bye into the 100m in Beijing thanks to his 2014 Diamond League title and is focusing this week on the 200m and a possible double world championships challenge to Jamaican superstar Usain Bolt.

“Just being able to come back from a mistake, show the world that you can make up for the mistake — it means a lot,” Gay said.

Bowie powered past English Gardner, who finished second in 10.86 with collegiate standout Jasmine Todd third in 10.92.

The six women under 11 seconds was a first in a US 100m final, topping the five at the 2013 championships in Des Moines.

“I for sure think we made a statement to the world today,” Bowie said.

Carmelita Jeter, the 2011 world champion and three-time Olympic medallist, missed out on a Beijing berth, finishing seventh in 11.01.

The final, in a legal wind of 1.2 metres per second, followed a scintillating semi-final show in which Bowie’s wind-aided 10.72sec was the top qualifying time, ahead of Jeter’s 10.76 for second in the same heat.

Gardner had won her semi-final in 10.79, the fastest time in the world this year with a legal wind that was matched by Shelly-Ann Fraser-Pryce at the Jamaican trials in Kingston on Friday.

There was a shocker in the women’s 400m semi-finals, as reigning Olympic champion Sanya Richards-Ross failed to make the final, finishing fifth in her heat in 50.95sec.

Richards-Ross could still get a 4×400 relay berth for Beijing — a chance to add to her tally of five world titles.

But it was a blow for the runner who missed the 2013 Worlds in Moscow with a foot injury.

Francena McCorory led the way into Saturday’s final with a time of 49.85 — shaving one-hundredth of a second off her own world-leading time of 2015.

Olympic 200m gold medallist Allyson Felix made it safely into the final as she attempts to give herself the option of contesting the 400m in Beijing, where she has a bye into the 200m.

Sharika Nelvis clocked a season-leading 12.34 to top the times in the women’s 100m hurdles heats.

Keni Harrison followed Nelvis into the semi-finals with a time of 12.46, followed by Stowers (12.47), and last year’s Diamond League winner in the event Dawn Harper-Nelson (12.48).

Reigning world champion Brianna Rollins also made it into the semi-finals with a time of 12.72.

Nelvis said the depth of talent in the event was a constant motivator.

“Every round I’m trying to kill it,” she said.