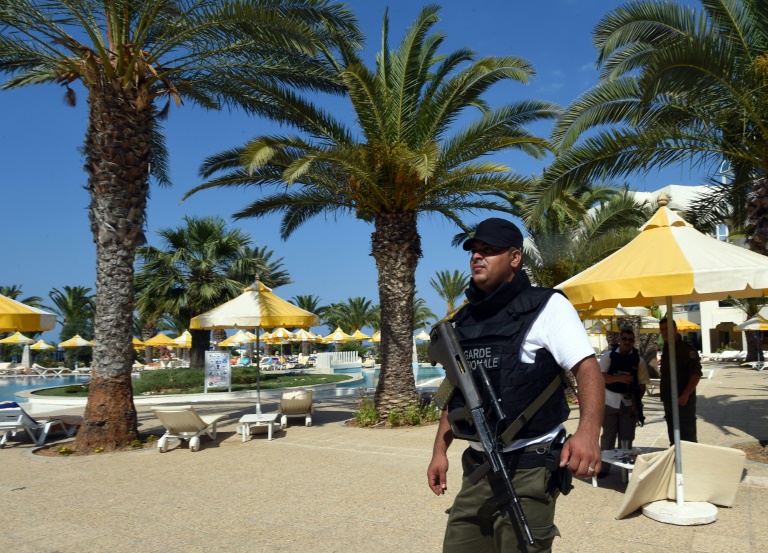 A gunman shot dozens at a Tunisian beach resort, a suicide bomber targeted a mosque in Kuwait and in France, a lone killer pinned a decapitated head to the gates of a factory, in an international Islamist assault on Friday.

The killings were not apparently coordinated, but the Islamic State group claimed the bloody attacks in Tunisia and Kuwait, which come just days before the first anniversary of when it declared its “caliphate” spanning Iraq and Syria.

Thirty-eight people — most of them British tourists but also including Germans, Belgians and French — were shot dead at the packed Tunisian Mediterranean resort of Port el Kantaoui after a man pulled out a gun hidden inside a beach umbrella.

IS said the gunman, who they identified as Abu Yahya al-Qayrawani, was a “solider of the caliphate” who had targeted enemies of the jihadist group and “dens (of…) fornication, vice and apostasy”.

The jihadists also claimed the suicide bombing at a Shiite mosque in a rare attack on Kuwait in which 27 people were killed, and Islamist flags were found at the site of the French attack.

The bloodshed comes on the second Friday of the holy month of Ramadan in which Muslims observe a fast from dawn to sunset every day.

“The best acts that bring you closer to God are jihad, so hurry to it and make sure to carry out the invasion this holy month and be exposed to martyrdom in it,” Adnani said in an audio message posted online.

“These are your weapons and this is Ramadan.”

The day of Islamist bloodshed began with a dawn raid on an African Union base in Somalia by Al-Qaeda affiliated Shebab militants who often increase attacks during Ramadan.

Witnesses said as many as 50 people were killed in Lego village, 100 kilometres (60 miles) northwest of the capital Mogadishu, and some of them beheaded, before Shebab hoisted a black Islamic flag over the base.

In France, at least one extremist rammed a car into a factory owned by US firm Air Products near France’s second city of Lyon.

The severed head of a businessman, identified as the suspect’s boss by police, was found attached to the gates of the factory.

The alleged attacker, named by police as Yassin Salhi, appeared to have been trying to blow up the plant by releasing explosive gases when he was caught.

Interior Minister Bernard Cazeneuve said the attacker was known to have links to a radical form of Sunni Islam and Islamist flags were displayed around the severed head.

“The intent was without doubt to cause an explosion. It was a terrorist attack,” said Hollande.

No evidence has been found linking Salhi to IS, although his colleagues said he used to discuss the group and beheadings have become a hallmark of the jihadists.

Shortly after the attack in France, a gunman entered a resort on the sun-soaked Tunisian coast before opening fire, the second attack against tourists this year and the worst in the country’s recent history.

Tunisian Prime Minister Minister Habib Essid said 38 people had been killed, most of them British tourists, as well as Germans, Belgians and French. An earlier death toll of 39 was said to have included the dead gunman.

The day’s third attack hit Kuwait when a suicide bomber entered a mosque in the capital as Muslims took part in Friday prayers, killing 27 people and wounding more than 200.

It was the Gulf state’s first such attack in nearly a decade.

An IS-affiliated group in Saudi Arabia, calling itself Najd Province, said one of its militants had carried out the bombing in a mosque it claimed was spreading Shiite teachings among Sunni Muslims.

IS, a radical Sunni Muslim group, considers Shiites to be heretics. Najd Province has also claimed responsibility for several other attacks on Shiite mosques in neighbouring Saudi Arabia.

Kuwait’s emir, Sheikh Sabah al-Ahmad al-Sabah, said after visiting the site of the attack that it was “a desperate and evil attempt targeting Kuwait’s national unity”.

France and Spain raised their alert level after the attacks, and Britain increased security at public events.

Messages of condemnation and support poured in from around the world after the three attacks, which the White House described as “heinous”.

“Our hearts all go out to the victims of these appalling terrorist attacks,” Britain’s Prime Minister David Cameron said, branding them the fruit of “perverted ideology”.

German Chancellor Angela Merkel said the attacks “show the challenges we face when it comes to fighting terrorism and Islamist extremism”.

The Islamic State group marks June 29 as the first anniversary of its self-declared “caliphate” straddling Iraq and Syria.

The jihadists rule their territory under a harsh form of Islamic law and are known for meting out brutal punishments for breaking their laws and massacring anyone who stands in their way.

IS were accused by the Syrian Observatory for Human Rights of killing 164 civilians in an offensive on the Kurdish town of Kobane.

On Friday, IS fighters attacked the Syrian town from which it was dramatically ousted in January by Kurdish militia backed by US-led air strikes after four months of heavy fighting.