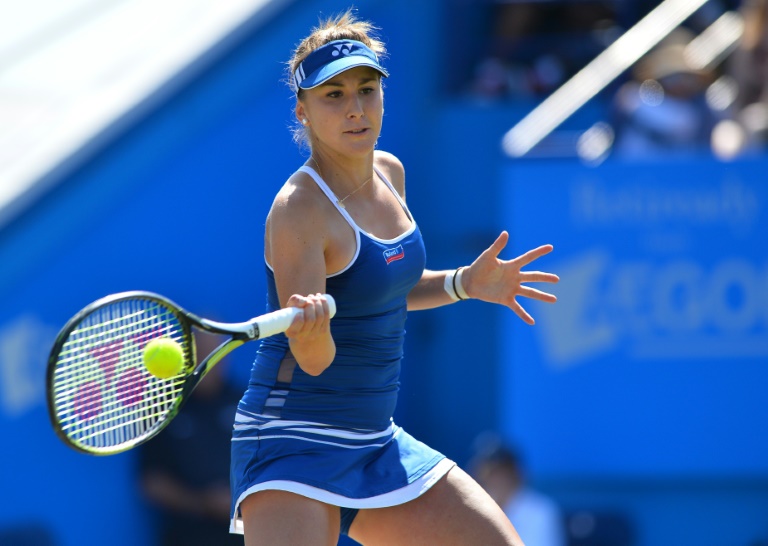 Belinda Bencic defeated Agnieszka Radwanska 6-4, 4-6, 6-0 at Eastbourne on Saturday to win the first title of her career and hailed the influence of superstar compatriot Martina Hingis.

The trophy breakthrough for the 18-year-old Swiss denied the ninth-seeded Pole, and 2012 Wimbledon finalist, a second title at Devonshire Park on the English south coast.

Bencic, coached part-time by Hingis and by Hingis’s mother Melanie Molitor, was playing in the third final of her career.

She was beaten this month in the grass-court final at ‘s-Hertogenbosch in the Netherlands by Italian Camila Giorgi.

The youngster credited the Hingis team with “teaching me everything I know”.

“Martina gives me a lot of good advice, not just this week but all the time. Also I practice with her mom, so she’s my coach when I’m back at home.

“Of course they have been big influence on my game.”

Bencic got away to a treble break in the third set for 5-0 as she finished the job against the 2008 Eastbourne champion with a forehand winner to the corner.

“This is the biggest day of my career,” said the world number 31 who will rise 10 places after her maiden trophy.

“This is a dream come true. I’m so happy to win my first title. I woke up very nervous this morning and even in practise I was nervous.

“But once on the court I tried to fight for every point, I tried my best.”

Bencic, who finished with 41 winners and 22 unforced errors, won the opening set in just under an hour.

Radwanska denied the teenager a straight sets victory by taking the second to level after Bencic came back from an early break but lost the set with a backhand long.

In the third, the Swiss quickly recovered her poise to run away to the win in just over two hours.

“I was very focused and really I played very free. I was disappointed I didn’t close out the second set. I was also starting to get tired,” said Bencic.

“It was a lot of running and, yeah, long rallies. After the 3-0 (third set) I relaxed a little bit and could close it out very good.”

“I’m happy to have played the final, I tried my best but Belinda was better today. After I won the second set I knew things could change quickly,” said the Pole.

“But it was a very tight match and I was just not there in the third set.”

Bencic, still on a high after her first title, must now turn her thoughts to Wimbledon.

“I play Monday first round, Tsvetana Pironkova (a Wimbledon semi-finalist in 2010) is not an easy draw.

“Tomorrow I have to recover very good and practice a little bit, and then I really need to focus on that first round because it’s not very easy.

“But I’m not thinking about winning it “

Bencic benefited from two injury retirements in Eastbourne (Eugenie Bouchard and Caroline Wozniacki), spending only 13 minutes on court in her semi-final when Wozniacki stopped after three games with a back problem.

Radwanska had been bidding for the 15th trophy of her career and second on grass.

Bencic, second-youngest member of the WTA top 100, improved her career grass-court record to 11-2.