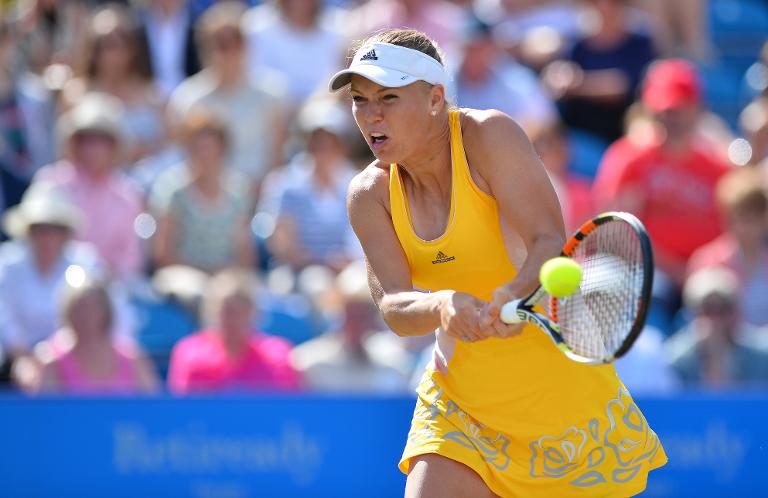 Second seed Wozniacki is bidding for a second trophy at Devonshire Park after winning the pre-Wimbledon tune-up in 2009.

The Dane was tested slightly in the opening set but lifted her game in the second to sprint to victory in under 90 minutes, with 10th seed Petkovic broken seven times.

“It was a tough match, she gets a lot of balls back,” said former number one Wozniacki.

“I returned well today, which was the key to the win. I’ve been playing well all week and I’m happy with my form. I just want to carry it over into the semis.”

Bencic took just under two hours to eliminate the last British challenge of the home week.

The number 31, who played a grass-court final this month in the Netherlands, defeated Australian-born Briton Johanna Konta 2-6, 6-0, 6-3.

World number 146 Konta came in on a wildcard and turned in the best week of her career as she won three consecutive matches. The last to do that on the English south coast was Jo Durie 32 years ago.

Bencic lost the opening set but changed tactics to get back into the contest.

“It was a very difficult match, she’s a good player and really made me work,” said Bencic, advised by the mother of former Swiss prodigy Martina Hingis.

“We had some great rallies. I didn’t play badly in the first set, but I missed on some key points,” said Bencic.

“In the second and third I played more aggressively and got in more first serves.

“Of course I knew that the crowd was on her side but thanks to the fans who cheered for me. I was fighting on very point.”

Bencic survived six aces from Konta and saved 10 of a dozen break points against her serve.

In the other half of the draw, former champion Agnieszka Radwanska advanced 6-2, 6-2 over Bulgarian Tsvetana Pironkova.

The 2008 champion from Poland, who went out in the first round in three successive editions from 2012-2014, needed just 65 minutes to advance from four breaks of serve.

World number 13 Radwanska, seeded ninth, will on Friday face off against Sloane Stephens after the American advanced without hitting a shot when Russian lucky loser opponent Daria Gavrilova withdrew before their quarter-final with an abdominal strain.

Radwanska improved her Eastbourne record to 12-7 as she beat Pironkova for the ninth time in 11 meetings, following up her Nottingham semi-final on grass earlier in June.