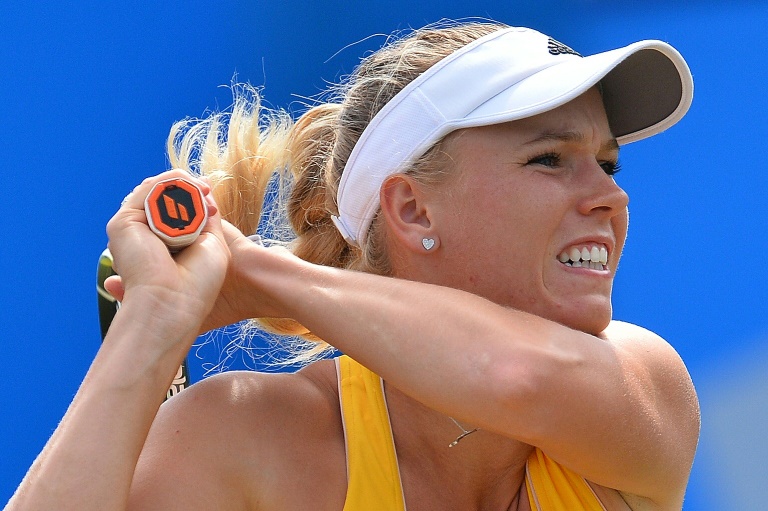 Double junior Grand Slam winner Belinda Bencic will be aiming for the first WTA title of her career after injured opponent Caroline Wozniacki quit their semi-final after 13 minutes at the Eastbourne International on Friday.

The second seed and former number one withdrew trailing 3-0 with back pains as a precaution, with Wimbledon starting on Monday.

Wozniacki called for the trainer after the third game and following consultations with the tournament doctor, decided to pull out.

Switzerland’s Bencic, ranked 31st in the world, will face off on Saturday against Agnieszka Radwanska, who reached the final for the first time since 2008 with a defeat of Sloane Stephens 6-1, 6-7 (3/7), 6-2 in a windswept showdown.

Bencic was surprised at the sudden turn of events, with the 18-year-old saying she was more concerned about a minor knee problem she suffered during a fall on court the day before.

“This is definitely not the way I wanted to win, of course.” said the 2013 Roland Garros and Wimbledon junior champion.

“I didn’t know anything (about Wozniacki’s problem) before the match. Of course I also fell down a little bit yesterday, so I was more thinking of myself in that moment, so I didn’t notice anything she had.

“I’m fine, I have a taping just for prevention.”

Wozniacki is hoping to be ready for Wimbledon after her decision to quit the semi-final so as not to do any more damage to her back.

“I’ve had a slight back problem the whole week, basically. Today it stiffened up more, and I felt like I couldn’t move the way I wanted to and felt pain.

“I felt really bad for the crowd and everyone who had come out, but there’s nothing really I could do about it.

“It’s all about for me now just to look ahead for Wimbledon and just get as much treatment as possible and be ready for my first round there.

Radwanska survived multiple momentum shifts in the wind against Stephens. But the Pole proved to be the more durable.

“Today it was so tough with the wind. it’s the worst thing for players. It was a struggle form start to finish.”

Radwanska made a stand early in the match as she denied Stephens on ten break points in two service games before finally gaining control of the opening set.

In the second, the American’s level continued to fluctuate with Stephens looking down and out before suddenly breaking as Radwanska served for victory. With the set reaching a tie-breaker, Stephens took her chance to level at one set each.

But Radwanska again found a way through in the third, despite losing serve while leading 3-1. The seed broke back in the sixth game and closed out the challenging win on her second match point on a mis-hit which caught Stephens by surprise.

Radwanska will be seeking her first title since Canada last August.