Home Face Off The Bowler’s nightmare 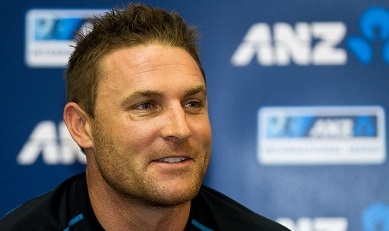 Brash, brutal and brilliant to watch, this destructive hitter of the cricket ball can bash any bowling attack.

In 2015, he hit the fastest World Cup half-century achieving the feat in 18 balls.

Brendon Barrie McCullumÂ was born on September 27, 1981 in Dunedin.

His brotherÂ Nathan McCullumÂ is also a first-class and international cricketer, and their fatherÂ Stuart McCullumÂ was a long-serving first-class player forÂ Otago. Both Brendon and Nathan attendedÂ King’s High School.

He is married to Ellissa McCullum (nÃ©e Arthur), an Australian from Caniaba, New South Wales.

They have a son Riley and a daughter Maya.

The right-handed wicket-keeper batsman played his first ODI in 2002 but struggled to get going in his first two years of international cricket.

However, from 2004 onwards, a steady improvement in the batting charts not only saw him establish himself in ODIs but also inspired confidence in the selectors to give him a break in Test cricket.

In his first Test against South Africa, McCullum went on to score 57 in the first innings.

He scored his maiden Test hundred against Bangladesh in only his seventh Test and came up with a few more good knocks but as has been the general trend for wicket-keepers, continued to be wasted in the middle order.

The year 2007 saw his rise as helped his team whitewash Australia in a 3 match ODI series after being promoted to the top of the order. In the World cup that year, he set a new World Cup record, by smashing 50 runs from just 20 balls againstÂ Canada.

A year later, he set alight the inaugural season of the Indian T20 League with his breath-taking unbeaten 158, setting high standards for the remainder of the tournament.

In 2008, he scored his maiden ODI century, eventually getting dismissed for 166 againstÂ Ireland. He shared in a 266 run opening stand which is the highest ODI partnership for any wicket in New Zealand history and the second highest opening partnership in all ODIs.

In 2009, he had notched up four consecutive fifties in T20Is, one each against West Indies and Australia and two against India.

McCullum gave up on his wicket-keeping in Tests to concentrate on batting but still remained sharp and safe in the outfield.

Â In 2012, he was handed over the captaincy role, taking over from Ross Taylor after the latter had a fall-out with the team management.

Under his able leadership, New Zealand hasnâ€™t lost a Test series since losing in England in 2013.Â

In 2014, Â McCullum was namedÂ New Zealander of the YearÂ by theÂ â€˜New Zealand Heraldâ€™Â due to his continued co-operation with ICC over the match-fixing scandal and also for changing the perception of the Black Caps as easy-beats.

The same year, McCullum touched dizzying heights as a batsman. He became the first cricketer from New Zealand to compose a tripe century against India in Wellington. He also essayed a brilliant double ton off just 186 balls against Pakistan in Sharjah. In the Test series against Sri Lanka, he came close to breaking the record for quickest double ton in the history of Test cricket, before he was dismissed for 195 off just 134 balls.Â