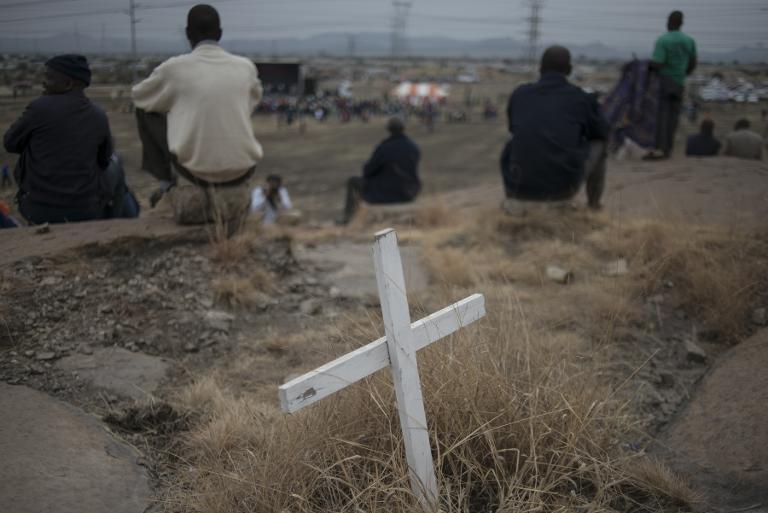 A 2012 South African police operation that left 34 Marikana mine workers dead should “not have taken place”, a long-awaited report said Thursday, calling on the officers involved to face a criminal investigation.

Presenting the findings of a commission of inquiry, President Jacob Zuma described the shooting — the worst violence in South Africa since the end of apartheid — as “a horrendous tragedy that has no place in a democracy”.

“The commission found that the police operation should not have taken place on the 16th August because of the defects in the plan,” said Zuma in a public broadcast.

He said the commission recommended “a full investigation under the direction of the director of public prosecutions… with a view to ascertaining criminal liability on the part of all members of the South African Police Service who were involved in the incidents.”

On August 16, 2012, after days of violent protests at Lonmin platinum mine northwest of Johannesburg, police opened fire on a group of demonstrating workers, killing 34 people.

In the days leading up to the attack, 10 others had been killed in violence related to the strike — including non-striking miners, security guards and two police officers who were hacked to death.

But the commission found a police operation to forcefully remove the miners, a few of whom were armed, should not have been carried out.

“It would have been impossible to disarm and disperse the strikers without significant bloodshed,” Zuma cited the report as saying.

The findings also slammed the poor police communication on the day and the “complete lack of command and control” at one of the shooting scenes, he said.

Nomzamo Zondo, one of the lawyers for the dead miners’ families, cautiously welcomed the report.

Days after the shooting, which stunned the nation, Zuma established the Farlam Commission of Inquiry to investigate the events at Marikana, with the power to recommend certain individuals be criminally charged.

The commission’s 646-page report was handed to the president on March 31 after more than two years of hearings plagued by delays.

Zuma finally made the report public Thursday after facing pressure to release the findings.

The families of the victims had accused the police of acting to avenge the two officers killed during the strike and asked that senior police officials be held accountable.

The commission’s report cleared senior government officials for any culpability in the incident, including then police minister Nathi Mthwethwa and former mines minister Susan Shabangu.

It also cleared Zuma’s deputy Cyril Ramaphosa, a Lonmin board member at the time and long touted as a possible presidential contender, of any responsibility.

The commission did however recommend that an inquiry be held into National Police Commissioner Riah Phiyega’s fitness to hold office.

Mining house Lonmin was meanwhile slammed for failing to resolve the wage dispute or provide adequate protection for non-striking miners.

Lonmin “insisted that those employees who were not striking should come to work despite the fact that it knew that it was not in a position to protect them from attacks by strikers,” Zuma said, citing the report.

The report also took aim at the National Union of Mineworkers (NUM) and the Association of Mineworkers and Construction Union (AMCU) — for failing to “exercise effective control” over their members “in ensuring that their conduct was lawful and did not endanger the lives of others”.

Zondo, the lawyer for the victims’ families, welcomed the criticism of Lonmin.

“Lonmin could have just dismissed the husbands of my clients, but instead refused to negotiate and now they sit with the consequences,” she said, adding the families still felt “deeply betrayed” by the mine.

Lonmin called the report’s release “a vital step in the healing process”.

“As a company we have worked hard over the past two-and-a-half year years to build a more open, transparent and mutually trustworthy environment, and in the process make Lonmin a safer, better place to work,” it said.

The main opposition Democratic Alliance (DA) welcomed the report’s recommendations on improving the police’s ability to handle violent protests, but said it was “perplexed” that the police minister was not held responsible — as well as by the silence of the commission on potential compensation for the families.

“We will be doing two things: one is to ensure all recommendations are followed and implemented, but most importantly and inevitably, the second thing will be to hold the former police minister accountable and table a motion within the national assembly,” said DA lawmaker James Selfe.

Zuma described the Marikana deaths as a “painful episode” that the country should learn from.

“Breadwinners were taken away from their families in a brutal manner and untold pain and suffering befell the families and relatives,” Zuma said.

“The entire South African nation was shocked. The world was also shocked.”