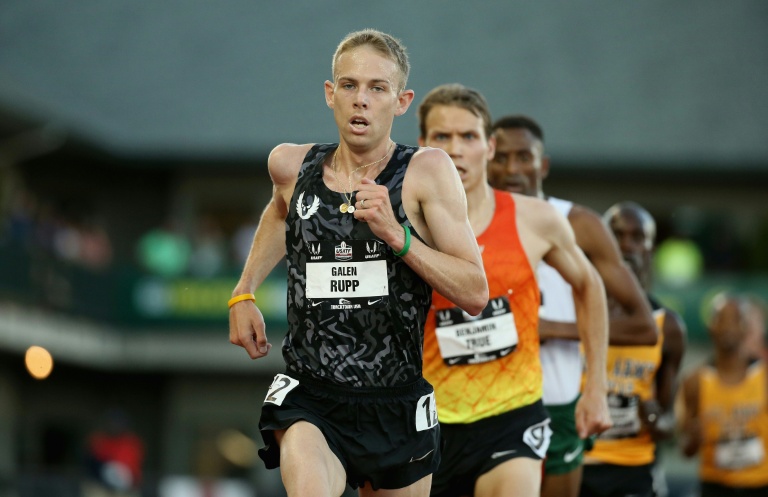 Galen Rupp capped a month of turmoil with a seventh straight US national title in the 10,000m, punching his athletics World Championships ticket amid doping accusations.

“It’s been hard I’m not going to lie,” Rupp said of the allegations leveled in a BBC documentary in collaboration with the ProPublica website that his coach, Alberto Salazar, violated various anti-doping rules and doped Rupp himself with testosterone in 2002 when Rupp was only 16.

“It has been difficult to focus,” the 10,000m Olympic silver medallist said, adding that he was “100 percent behind” the detailed rebuttal issued by Salazar on Wednesday in which the coach said he would “never permit” doping.

“I believe in clean sport, and I think the truth will prevail,” said Rupp, who broke from a tight leading group to seize the lead with three laps remaining and pulled away inexorably to win in 28min 11.61sec at the US championships.

“It was obviously a good test,” said Rupp, who received a warm reception from his home state fans in Oregon. “A good field — they made it really honest.”

Farah hasn’t been accused of wrong-doing, but he’s been dogged by questions about whether he should continue to train under Salazar in Oregon.

“We’ve talked, for sure,” Rupp said of Farah. “I can’t speak for him, obviously, but I think we’ve got a great thing going and he’s had great success. We know we do things the right way so really that’s all I’ve got to say to him.”

Facing a massive scrum of journalists, Rupp said he intended to keep his mind on his racing through the end of the championships, with the 5,000m scheduled for Sunday.

“I’m ready to race,” he said. “This is why I compete and I’m not going to let anything get in the way of that.”

Rupp isn’t the only athlete hoping to put doping questions behind him on the track this week, as veteran sprinters Justin Gatlin and Tyson Gay, both back from drugs bans, seek to set themselves up to challenge Jamaican sprint king Usain Bolt at the World Championships in Beijing August 22-30.

Gay, trying to regain a place among the world’s elite after serving a one-year ban, eased into the 100m semi-finals.

But the 32-year-old got a taste of how hard it might be to make a first World Championships team since 2009 as he finished second in his heat to 22-year-old training partner Remontay McClain.

And 19-year-old collegian Trayvon Bromell was also faster than Gay, winning his heat in 9.84 in a legal wind of 1.3 meters per second.

“It was weird â€”- maybe weird’s not the right word â€” the different guys I’m running with now,” Gay said. “It’s a different era for me.”

But he was pleased with a performance that he believes sets him up well for Friday’s semi-finals and final.

“It felt good. I felt relaxed,” said Gay, adding he managed to “get the nerves out of the way.”

Gay and the rest don’t have Gatlin to contend with in the 100m. He owns the two fastest 100m times in the world this year of 9.74 and 9.75, but has a bye into the worlds as the 2015 Diamond League 100m winner and is focusing is attention this week on the 200m and a possible Beijing double.

In the women’s 100m heats, 2011 world champion Carmelita Jeter blased to a wind-aided 10.87 to lead the way into the semi-finals.

Jeter, who raced through a quadriceps injury to bronze at the 2013 world championships, just edged Jasmine Todd, who finished second in their heat in the same time in a favorable wind of 4.5 meters per second.

Among the seven finals on the opening night of the meeting, Marquis Dendy punched his ticket to Beijing with a victory in the men’s long jump with a wind-aided leap of 8.68m.

Jeffrey Henderson, who owns the best jump in the world this year of 8.50, was second with 8.44m and Michael Hartfield was third with 8.42.