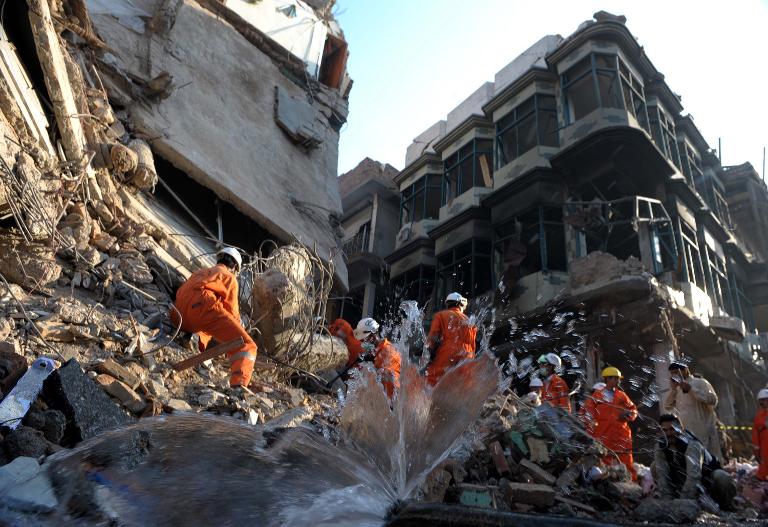 A Pakistani accused of organising a 2009 bomb attack on a Peshawar market that killed more than 130 people, has been detained in Italy, police said Friday.

Siyar Khan, 36, who is also suspected of involvement in a potential plot against Pope Francis, was arrested on terrorism charges as he stepped off a flight from Islamabad to Rome on Thursday evening.

In a statement, police said they suspected he had an “executive role” in what was one of the worst attacks in Pakistan’s history – the October 28, 2009 bombing of the crowded Meena Bazaar which left 134 dead, including scores of women and children, and more than 200 others injured.

Authorities at the time blamed the Taliban, which denied carrying out the attack.

Italian anti-terrorism detectives believe Siyar Khan was part of a jihadist network based in Italy which was plotting terror attacks on Rome and possibly the Vatican to be carried by suicide bombers imported from Pakistan.

The suspect, who is legally resident in Italy, is accused of sheltering one of the would-be suicide bombers, who entered the country in March 2010 and is believed to be still at large.

The detention of Khan came two months after police on the island of Sardinia issued 18 arrest warrants as part of an operation against what they described as an Islamist terror cell led by two former bodyguards of Osama bin Laden.

The cell allegedly operated out of Olbia, a Sardinian town which has a small, long-standing Pakistani community.

Only nine of the suspects were actually arrested in April with the others mostly thought to have fled to Pakistan before the raids.

Mario Carta, one of detectives in charge of the investigation, told AFP the Italian authorities consider Siyar Khan to have been the right-hand man of Sultan Wali Khan, an Olbia shopkeeper arrested in April whom they suspect of having planned and financed the Peshewar attack.

Carta said that the would-be suicide bomber arrived in Italy in March 2010 with the intention of mounting an attack, “perhaps on Rome, even the Vatican cannot be ruled out.”

“We have not been able to establish the identity of the kamikaze (bomber) … but we believe he is still at large in Italy, most probably in the region of Olbia, which had become a nerve centre of jihadist activity,” Carta told AFP.

The operation against the alleged cell followed a six-year investigation that began with a probe into an illegal immigration racket allegedly run from Sardinia.

The prosecutor in charge of the case said in April that the existence of a possible conspiracy to kill the pope was based on wiretaps in which the suspects had spoken “in ironic terms” about the leader of the world’s Catholics.

At the time, the Vatican played down the significance of the investigation, saying it concerned a 2010 scenario that didn’t materialise and insisting there was no need for additional measures to protect Francis.

Among the others arrested in April was Zulkifal Hafiz Mohammed, an imam who worked in Brescia and Bergamo in northern Italy and allegedly raised funds for radical groups.

The arrest warrants accuse the suspects of belonging to “an organisation dedicated to transnational criminal activities inspired by Al-Qaeda and other radical organisations pursuing armed struggle against the West and insurrection against the current government of Pakistan.”

Police said in April that two members of the network were part of bin Laden’s security detail before his slaying by US special forces in Pakistan in May 2011 while others were in contact with the late Al-Qaeda leader’s relatives.

According to police, the Islamist group based on Sardinia was involved in smuggling Pakistani and Afghan nationals into Europe through Italy, via visa and asylum scams.

Funds raised from this activity were allegedly sent back to radical groups in Pakistan, including Al-Qaeda offshoots and the local Taliban.