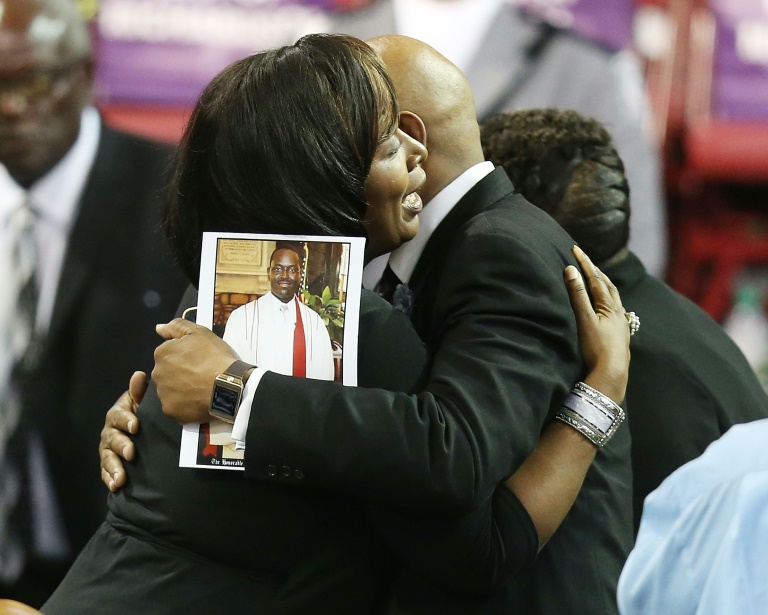 Thousands of mourners gathered Friday in Charleston to honor a pastor who was among nine black people gunned down last week in his church by a white alleged supremacist in an attack that shocked America.

President Barack Obama was to give the eulogy for Clementa Pinckney, who was also a state senator in South Carolina, in a speech to be watched closely in a nation still reeling from a violent act meant to tear open its racial divide.

The city of Charleston has tried to come together after the killings, and 6,000 people gathered for the ceremony at a university arena a short distance from the Emanuel African Methodist Episcopal Church, the scene of the crime.

The young man charged with the murders, 21-year-old Dylann Roof, published a white supremacist manifesto before the attack, including pictures of him with the controversial Confederate flag, seen by many as a symbol of hate.

“He wanted to start a race war but he came to the wrong place,” church Bishop John Richard Bryant told mourners, eliciting cheers.

Some arrived in the early hours under a blistering summer sun, forming long lines and anxious to secure seats for the event.

“We need to come together,” said 66-year-old Rose Marie Manigault, who made the short trip from Mount Pleasant to pick her spot just before dawn broke over the gathering throng.

Pinckney’s widow Jennifer and his daughter Malana wrote messages of remembrance in the program.

“We believe that your life mattered. It mattered to us, and it will forever change the culture and mindset of the world,” said his wife.

“I love you so much!” wrote Malana.

“A lot has already happened since the tragedy,” she said.

The banner, once flown by the rebel army of the slave-owning South, is seen by some as a symbol of regional heritage and by many more as an ugly reminder of racism’s cruel legacy.

In the wake of the attacks, many government bodies and private firms have moved to take it from view, and several politicians have spoken out against its use. Several major retailers have stopped selling flag merchandise.

As well as stirring debate about America’s racial divide, the massacre also fed the frustration felt by many at the country’s failure to control its gun culture.

Obama, having seen previous initiatives to control gun ownership fail in Congress, has expressed anger and declared that “at some point” America would have to act.

Along with Obama and his wife Michelle, Vice President Joe Biden and Republican House Speaker John Boehner were expected to attend Friday’s service.

On Wednesday, thousands filed past Pinckney’s open coffin at the South Carolina legislature in Columbia, where he had served as a senator.

Services for the other victims, all of whom were black, are scheduled throughout the weekend and into next week.

“It’s just an overwhelming expression of love and fellowship, to really see people come out and be a part of this unfortunate situation,” said former state representative Curtis Brantley, a friend of Pinckney.

“I’m hoping the president will simply share with us the importance of our getting along and understanding that people are people, regardless of their race, creed or color.”

In Washington, US Attorney General Loretta Lynch said earlier this week it was too early to say whether Roof will face federal civil rights charges.

A hate crimes investigation is unfolding, she said, but “it’s simply premature” to say how Roof might be charged.

South Carolina has charged Roof with nine counts of murder and a related weapons charge.