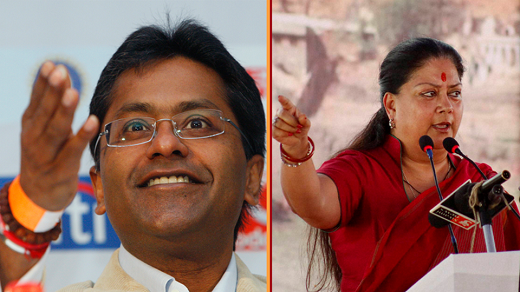 New Delhi: The LalitGate controversy is getting all the more stuffier for Rajasthan CM as more uncomfortable questions are raised on her involvement. While the UK government relied on her signed papers to relieve Lalit Modi, as a leading channel reports, more evidence in her involvement are emerging every now and then.Â The Rajasthan BJP is batting for her, saying that there was no clear case of financial benefit.Â

Earlier, Raje had said that she would quit if the Prime Minister Narendra Modi asked her to. She has been under immense pressure since Thursday, after she admitted to signing the papers as a ‘friend’.Â

With the opposition going hammer and tongs for the Raje to resign, we’ll have to wait and watch how it all unfolds.Â

Meanwhile,Â Lalit Modi’s tweets about “meeting the Gandhi family” in London have been seized by the ruling BJP as it confronts calls for the resignation of Rajasthan Chief Minister Vasundhara Raje for helping the graft-accused cricket boss.Â

In a three-part tweet, the former IPL commissioner said that he was “happy to meet the Gandhi family in London” and that he had bumped into Congress president Sonia Gandhi’s daughter Priyanka and her husband Robert Vadra at a restaurant.
Â 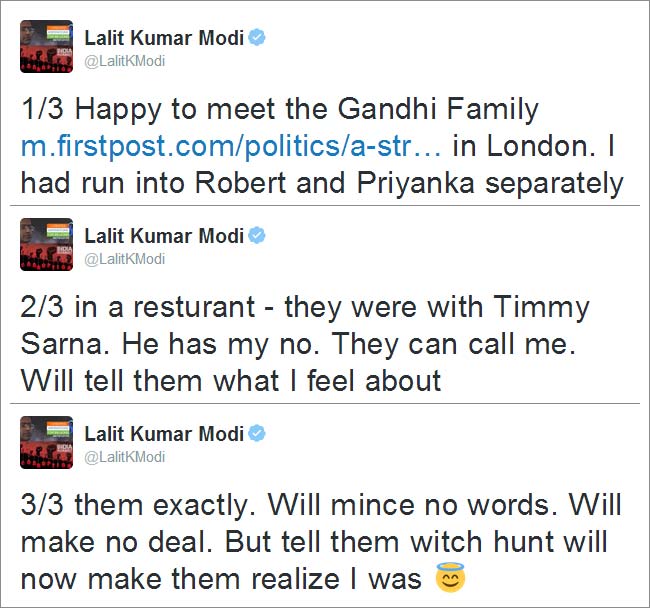 Earlier in the day, Raje had shown no signs of buckling down, claiming that she had the support of 120 MLAs, quoted by a leading national channel.

On Thursday,Â Raje had told BJP members that “she signed documents as a friend of Lalit Modi.â€

The document, purportedly signed by Raje in 2011, and filed by Modi’s immigration attorney Ghersons with the UK authorities endorsed Modi’s claim that he faced political persecution in India. Hence, he deserved to be given resident status. Raje said she was making the statement on the condition that it wouldn’t be known to Indian authorities.

This contradicts Raje’s claim that she signed no statement to aid Modi, who she acknowledged before the document was out. Although the statement was circulated by Modi’s counsel Mehmood Abdi last week, Raje had disputed the authenticity of the document citing that it did not bear her signature.

Meanwhile, Congress has stepped up its demands for sacking of the Rajasthan CM.

“Vasundhara Raje knows that the signature is hers and she has never denied it. So, I don’t think at this late stage to come out and say that they are forged or falsified, that’s really something that nobody is going to buy. And I hope BJP will also not buy that argument,” Pilot said.

“Unfortunately for them (BJP), they have to realize the inescapable truth is that she has broken the law. She has transgressed Indian law knowingly and the flying statement which shows that she was trying to help Lalit Modi get travel documents is in violation of Indian law and by no account can the BJP continue to defend the indefensible,” he added.