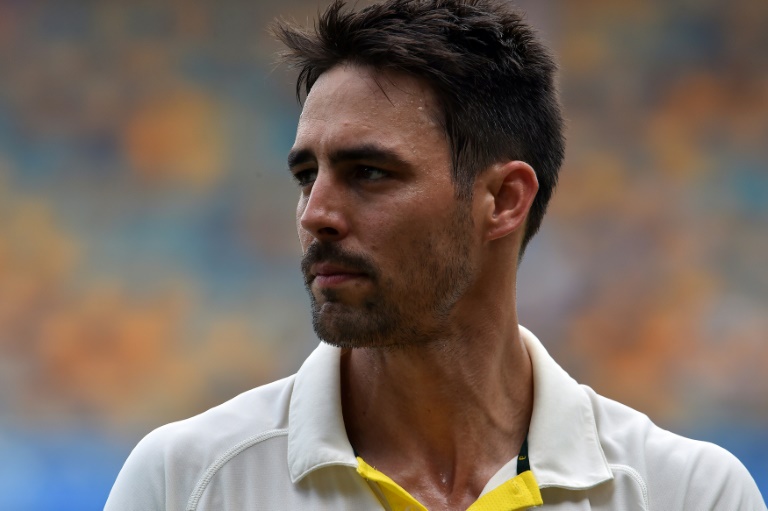 Mitchell Johnson gave England a reminder of what they can expect in the upcoming Ashes series with three wickets in Australia’s tour opener against Kent on Friday.

Left-arm fast bowler Johnson took a wicket with just his sixth ball of the match and returned late on to dismiss Kent captain Sam Northeast and Ben Harmison as he took three for 42 in 13 fiery overs.

But Kent, bottom of the Second Division of the County Championship, lost a cluster of wickets late in the day after Key was out and finished on 203 for five in reply to Australia’s imposing first innings 508 for seven declared — a deficit of 304 runs.

Earlier, Steven Smith showed just how far he had come in eight years with a century, having played for Kent 2nd XI as a teenager.

Johnson was one of England’s chief tormentors with 37 wickets at under 14 apiece as Australia completed a 5-0 home Ashes whitewash in 2013/14.

He had Kent’s Daniel Bell-Drummond lbw with a full-length delivery off the last ball of the opening over of Kent’s first innings on Friday.

Kent fought back during a second-wicket stand of 81 between Joe Denly and Key.

Denly, a former England one-day batsman, made 36 before he was caught behind off Peter Siddle.

Key, who played four Tests against Australia during the 2002/03 Ashes, really started to go for his shots after passing 50, pulling fast bowler Ryan Harris for four.

Johnson came back to have Kent skipper Sam Northeast, trying to leave the ball, gloving to wicket-keeper Brad Haddin.

Key, who played the last of his 15 Tests a decade ago, cut and pulled leg-spinner Fawad Ahmed for two fours in as many balls to move to within 13 runs of 100.

But next ball he was out for 87 — said to be Australia’s ‘unlucky’ number — when he slogged Ahmed to Shaun Marsh at mid-wicket.

Johnson, charging in down the hill at the St Lawrence ground, then bowled Ben Harmison, younger brother of former England paceman Stephen, as Kent declined to 168 for five.

In 2007, Smith played a handful of matches for Kent’s 2nd XI and spent the season with local club side Sevenoaks Vine, where he was regarded as a promising leg-spinner who batted.

Roll on to 2015 and Smith is now ranked as the world’s leading Test batsman, with an average of over 56.

Australia, who had been sent into bat, resumed on 348 for three after Mitchell Marsh (114) and Chris Rogers (84) had both made a case to open alongside the rested David Warner come the first Test against England in Cardiff on July 8.

Smith was 71 not out and Shane Watson unbeaten on eight.

The only time Smith looked in any trouble was on 99 when he charged down the pitch to Australia-born seamer Mitchell Claydon and missed with an expansive drive.

However, he soon whipped Claydon off his pads and beyond the mid-wicket rope to complete a 151-ball hundred featuring 11 fours and a six.

That shot came amidst a run of three successive fours before the 26-year-old Smith decided he had had enough batting and walked off.