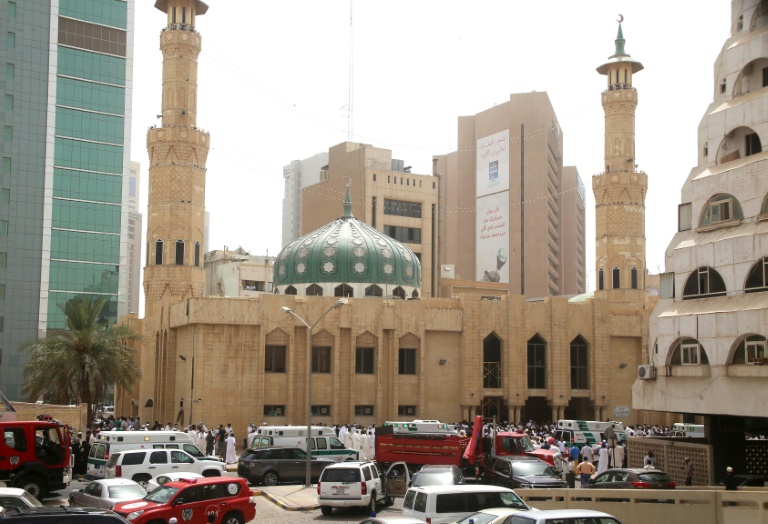 A suicide bomber blew himself up during Friday prayers at a Shiite mosque in the Kuwaiti capital, killing at least 13 people, and in an unprecedented attack claimed by the Islamic State group.

“The initial count for the casualties is that at least 13 dead, and 25 have been taken to hospital,” a medical source told AFP.

IS claimed what was the first-ever bombing of a Shiite mosque in Kuwait and the first terror attack in the Gulf state since January 2006.

The IS-affiliated group in Saudi Arabia, calling itself Najd Province, said militant Abu Suleiman al-Muwahhid carried out the attack on the mosque, which it claimed was spreading Shiite teachings among Sunni Muslims.

IS, a radical Sunni Muslim group, considers Shiites to be heretics.

The blast hit Al-Imam al-Sadeq mosque in Kuwait City, the interior ministry said in a brief statement without providing details.

The official KUNA news agency confirmed that there were “dead and wounded,” but also did not provide details.

A witness told AFP “dozens were killed and wounded,” and pictures circulating on social media showed several bloodied bodies in the mosque amid debris.

A security official said “it is a suicide bombing.”

An AFP photographer who arrived at the site after the bombing said the area was cordoned off by police.

The television showed footage of massive destruction caused by the blast, and people posted online horrific pictures of the dead and wounded.

The Kuwaiti cabinet went into an emergency meeting to discuss the incident, as the interior ministry raised the level of alert and mobilised all security forces.

A number of hospitals in the oil-rich emirate declared states of emergency to deal with the wounded, while the central blood bank appealed for blood donations.

Kuwaiti Shiites make up around one-third of the country’s native population of 1.3 million people.

The interior ministry said it launched a full investigation into the incident.

Three weeks ago, the ministry said it has raised the level of security around mosques following the bombings in neighbouring Saudi Arabia.

The bombing was strongly condemned by political groups, organisations and lawmakers.

The mainstream Sunni group, the Islamic Constitutional Movement condemned what it called “the low criminal attack targeting the (Shiite) mosque.”

Kuwait’s leading Sunni cleric, Sheikh Ajeel al-Nashmi, said on Twitter that the bombing is a “criminal act aimed at sowing seeds of discord, and undoubtedly Shiites and Sunnis will foil the terrorists’ plot.”

Independent MP Sultan al-Shemmari called on the government to “hit with an iron fist” against the “terrorists.”

In the past few weeks, Kuwaiti courts have tried a number of people on charges of being IS members and sentenced at least one of them to several years in jail.