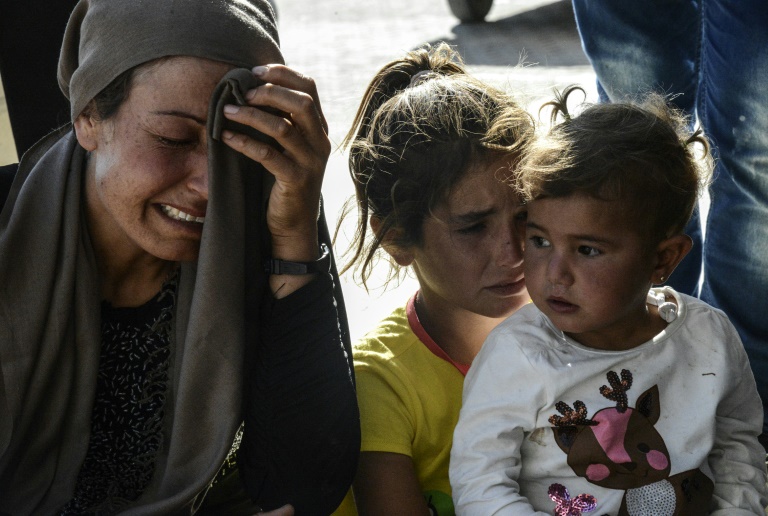 At least 120 civilians have been killed by the Islamic State group since it entered the Syrian Kurdish town of Kobane just over 24 hours ago, a monitoring group said Friday.

“According to medical sources and Kobane residents, 120 civilians were executed by IS in their homes or killed by the group’s rockets or snipers,” said Rami Abdel Rahman, director of the Syrian Observatory for Human Rights.

He described it as one of the group’s “worst massacres” in Syria.

Another 26 civilians were executed by IS on Thursday in a village near Kobane, on the border with Turkey, the Observatory said.

“When they entered the town, the jihadists took up positions in buildings at the southeast and southwest entrances, firing at everything that moved,” Abdel Rahman said.

He said the bodies of civilians, among them women and children, were found in their homes and in the streets.

“The jihadists knew that they could not stay and control the town in the face of the Kurdish forces. They came just to kill and strike a moral blow to the Kurds,” Abdel Rahman said.

IS launched a surprise attack on Kobane on Thursday involving three suicide bombers, just over a week after Kurdish militia ousted it from Tal Abyad, another border town further east.

Analysts said the assault was revenge for the loss of Tal Abyad.

Backed by US air strikes and Syrian rebel groups, Kurdish militia had pushed IS out of Kobane in January in one of the jihadists’ most dramatic defeats.

The Islamic State group killed 120 civilians in a 24-hour rampage through the Kurdish town of Kobane in what a monitor said Friday was one of the jihadists’ “worst massacres” in Syria.

The killing spree in the town, which has become a symbol of Kurdish resistance, was widely seen as vengeance for a series of defeats inflicted on the jihadists by Kurdish militia in recent weeks.

It began after three IS suicide bombers blew up vehicles at the entrances to the town on Thursday clearing the way for fellow jihadists to enter.

Women and children were among the slain civilians whose bodies were found in their homes and in the streets, the Syrian Observatory for Human Rights said.

“According to medical sources and Kobane residents, 120 civilians were executed by IS in their homes or killed by the group’s rockets or snipers,” Observatory director Rami Abdel Rahman told AFP.

“When they entered the town, the jihadists took up positions in buildings at the southeast and southwest entrances, firing at everything that moved.”

Local journalist Mostafa Ali said that there was no military dimension to the IS assault on Kobane.

“IS doesn’t want to take over the town. They just came to kill the highest number of civilians in the ugliest ways possible,” he told AFP.

The jihadist group also executed 26 civilians in a village outside Kobane on Thursday, the Observatory said.

The jihadists had entered Kobane at dawn on Thursday disguised as fighters of the Kurdish People’s Protection Units (YPG), said journalist Ali.

They then took up positions in buildings in the south of the town, using civilians as “human shields,” he said.

“There are at least 70 civilians in these various neighbourhoods that have been taken hostage by IS,” he added.

“The YPG has sent reinforcements and have encircled the buildings, but the situation is difficult. The YPG doesn’t want to hurt the women and children there.”

More than 1,000 fleeing civilians waited on the Syrian side of the frontier with Turkey on Friday, carefully watched by the Turkish troops and police on the other side.

Relatives who had made it to the Turkish side waved their hands and cried in despair, an AFP photographer reported.

Kobane was the scene of one of IS’s most dramatic defeats in January when it was ousted by Kurdish militia backed by US-led air strikes after four months of heavy fighting.

Kurdish fighters have gone on to seize Tal Abyad, another border town farther east, in a heavy blow to the jihadists’ supply lines.

IS has hit back with an offensive against the city of Hasakeh in the northeast, capital of the mainly Kurdish province of the same name.

“Thousands of civilians have fled the two neighbourhoods taken by IS on Thursday,” Abdel Rahman said.

He said Syrian government forces were carrying out air strikes against jihadist positions in the city, where they share control with Kurdish forces.

At least 20 jihadists and 30 pro-government fighters were killed when IS captured southern parts of the city.

Shekhmos, the Kurdish activist, said civilians from those neighbourhoods had fled to the Kurdish-controlled parts of the city, but that the YPG had yet to get involved in the fighting.

The jihadists previously advanced to the southern edge of Hasakeh in May but were pushed back by government forces.

In southern Syria, a rebel alliance pressed an assault on the city of Daraa which it began on Thursday.

Some 40 people have been killed in the fighting for the city, a provincial capital.

President Bashar al-Assad’s regime has already lost two provincial capitals in the four-year-old civil war: IS-held Raqa in the Euphrates valley and Idlib in the northwest, which is held by a rebel alliance including Al-Qaeda.