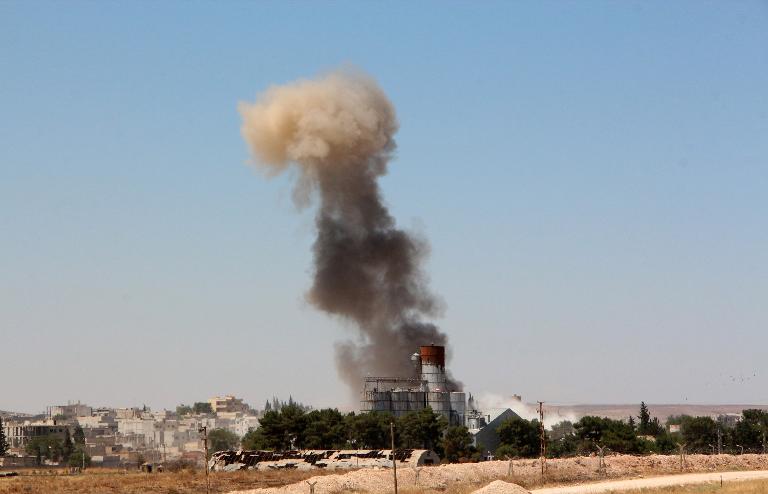 The Islamic State group launched a two-pronged offensive in northern Syria after several setbacks, re-entering the symbolic battleground town of Kobane and seizing parts of the city of Hasakeh.

In southern Syria, an alliance of rebel groups, including Al-Qaeda affiliate Al-Nusra Front, also attacked government-held areas of the city of Daraa in another potentially serious blow to the regime.

Analysts said the surprise IS assaults were aimed at diverting Kurdish forces after they scored a series of victories and advanced on the jihadists’ Syrian stronghold of Raqa.

Kobane, on the border with Turkey, became an important symbol in the battle against IS after the group launched a bid to take it last year.

But on Thursday, the jihadists returned, detonating a suicide car bomb near the border crossing adjacent to Kobane as they launched an assault. Hours later two more bombs exploded.

The Syrian Observatory for Human Rights said at least 35 civilians and Kurdish fighters were killed in the car bomb and subsequent fighting in the centre and south of the town, along with 22 IS militants.

“The bodies of jihadists are littering the streets,” said Rami Abdel Rahman, head of the Britain-based monitor.

In a statement posted on jihadist forums, IS said its fighters set off “several” bombs around Kobane, and “carried out multi-pronged attacks on several fronts” in the surrounding countryside.

IS jihadists also entered a Kurdish village some 20 kilometres (12 miles) south of Kobane in the morning, executing at least 23 residents, among them women and children, the Observatory said.

They withdrew from Barkh Butan after US-led coalition strikes on the outskirts of the village and the arrival of Kurdish forces, it added.

The IS assault on Kobane prompted angry Kurdish accusations that Turkey had allowed the jihadists to enter Syria from its territory, a claim Turkish President Recep Tayyip Erdogan dismissed as “defamation and propaganda”.

Since being pushed out of Kobane at the start of the year, IS has suffered a string of defeats at the hands of the Kurdish People’s Protection Units (YPG) and their Arab rebel allies.

On June 16, the YPG seized the border town of Tal Abyad, a key transit point for IS, and then drove south towards Raqa, the jihadists’ de facto capital.

As the Kobane attack began on Thursday, IS forces also entered the northeastern city of Hasakeh.

Charles Lister, a visiting fellow at the Brookings Doha Centre think-tank, said the dual assault was a diversionary tactic after Kurdish forces advanced to within 55 kilometres of Raqa this week.

“Events overnight in Kobane and Hasakeh have displayed classic IS strategy, whereby unexpected, spectacular attacks have been launched as diversionary operations aimed at distracting the Kurds from their role approaching Raqa,” said Lister.

IS fighters seized two neighbourhoods in southern Hasakeh, capital of a Kurdish-majority province in the northeast, the Observatory said.

At least 30 government loyalists and 20 jihadists were killed in the fighting, and civilian residents were fleeing to the north of the city, the monitor added.

Control of Hasakeh is divided between government loyalists and Kurdish militia who are mostly present in the city’s north and northwest.

IS has sought repeatedly to enter the city, including earlier this month when it advanced to the southern outskirts before government forces pushed it back.

On Tuesday night, two IS suicide bombers killed 10 Syrian soldiers in the city.

State television acknowledged “heavy clashes ongoing between Syrian army troops and National Defence Forces against IS terrorists in the Al-Nashwa district of Hasakeh.”

In southern Syria, government troops came under attack in Daraa, another provincial capital.

An alliance of rebel groups including Al-Nusra attacked government-held parts of the city, the Observatory said.

The Observatory said 18 rebel fighters and 20 regime soldiers were killed.

In eastern Syria, IS sold 42 women from Iraq’s Yazidi religious minority to its fighters in Deir Ezzor province, the monitor said.

The women were kidnapped during last year’s assault on the Sinjar region of northern Iraq, it added.

Across the border in Jordan, one person was killed and four wounded when a stray rocket hit a city around 10 kilometres south of Daraa, a government source said.

Washington, meanwhile, said Thursday it would provide $360 million in “life-saving assistance” to victims of the conflict, bringing its total to $4 billion since the fighting began.

The money will partly support various United Nations programmes and other non-governmental organisations in Syria, where more than 230,000 people have been killed since the conflict erupted with anti-government demonstrations in March 2011.