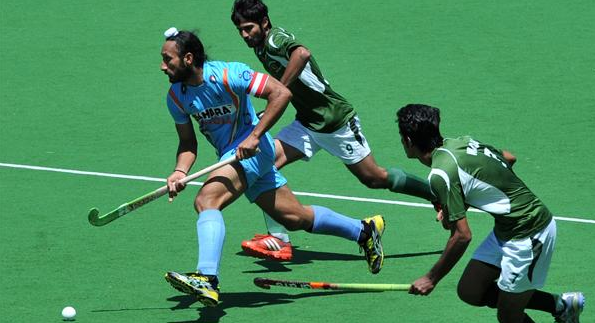 Antwerp:Â Ramandeep Singh scored two fine goals as the showpiece subcontinental hockey encounter between arch-rivalsÂ IndiaandÂ PakistanÂ ended in a thrilling 2-2 draw in the World League Semifinals at the KHC Dragons Stadium in Antwerp on Friday.Â

Asian Games champions India were threatening to score a late match-winner when their strikers thrice took shots at the rival citadel in the last three minutes during a surcharged encounter played at a brisk pace.Â

After opening the scoring in the 13th minute, Ramandeep came back to score the eventual equaliser with an opportunistic flick into the net in the 39th minute after Pakistan captain Muhammad Imran scored twice.Â

Imran’s two goals came off a penalty stroke in the 28th minute and through a rasping penalty corner drag-flick in the in the 37th.Â

The Indian defence gave a fine exhibition, but there were a lot of wayward marksmanship by their strikers as Pakistan also fell back to defend stoutly in the first encounter since the Champions Trophy semifinals.Â

Pakistan won that Champions Trophy semifinal contest at Bhubaneswar in December by one goal, but obscene gestures in the onfield victory celebrations led to suspensions of two Pakistan players.Â

India enjoyed some early domination in an exhibition of clean hockey by both sub-continental teams. Both India and Pakistan built their attacks on counters and the period of clean tackling was disturbed when Pakistan striker Muhammad Rizwan Junior’s swinging stick hit Yuvraj Walmiki on his right knee.Â

Yuvraj had to undergo a long period of ice-pack treatment on the bench before he was seen in action again late in the first half.Â

India took the lead in the 13th minute with a diving deflection by Ramandeep, who capitalised on Gurmail Singh’s diagonal cross from left into the circle.