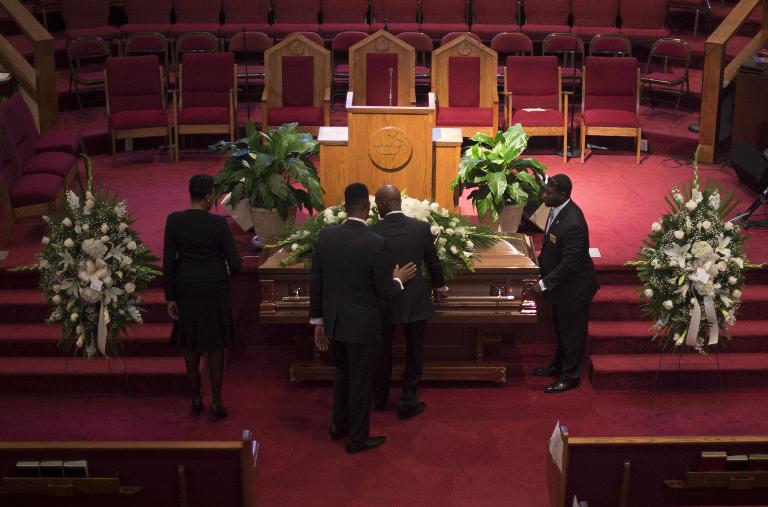 Hundreds filed past the open coffin of Ethel Lance, 70, at a funeral home in North Charleston, ahead of an afternoon service for Sharonda Singleton, 45.

The deceased were among the Bible study group that was targeted in the June 17 massacre at the historic Emanuel African Methodist Episcopal Church.

Dylann Roof, 21, is charged with murder in connection with the multiple killings, which he reportedly hoped would trigger a race war between blacks and whites.

President Barack Obama is scheduled to deliver the eulogy at Friday’s funeral of another victim, Emanuel’s chief pastor Clementa Pinckney, 41.

Obama will also meet the families of some of the other victims.

There was raw emotion at the Royal Missionary Baptist Church as friends and relatives bid a final farewell to Lance, a custodian at a Charleston arts center.

“I am here to tell you that we are stronger because we are together as a community,” Reverend Norvell Goff told the mourners, the local Post and Courier newspaper reported.

Lance was later laid to rest at the Emanuel cemetery, where her children and grandchildren kissed her coffin and well-wishers threw roses into her grave.

Singleton, a speech pathologist, high-school track coach and pastor at Emanuel, was remembered by a capacity crowd at the 2,000-seat Mount Moriah Missionary Baptist Church.

“She believed she could change every child,” said South Carolina Governor Nikki Haley, who attended both funeral services.

Seen in the pews were Jesse Jackson and Al Sharpton, two of the most recognizable civil rights activists in the United States today.

Obama “will be mindful of not just how sad it is that those individuals were taken from us, but also use the occasion to celebrate their lives,” White House spokesman Josh Earnest said.

Thousands have visited Pinckney’s open coffin at the South Carolina legislature in the state capital Columbia, where he had served as a senator.

Services for the other victims are scheduled throughout the weekend and into next week.

Meanwhile, the campaign against the Confederate battle flag flying outside the South Carolina legislature picked up steam.

As a state senator, McConnell favored the positioning of the flag alongside a Confederate memorial on the State House grounds 15 years ago.

“Today is a different time,” he said, adding that the flag should come down as a “statement of courtesy and goodwill to all those who may be offended by it.”

Some revere the Civil War-era banner as an emblem of Southern heritage, but others condemn it as a symbol of racial hatred and white supremacy.

Roof’s getaway car — he was arrested in North Carolina one day after the shooting — bore a Confederate license plate, and photos later emerged online of him brandishing the flag together with a handgun.

Haley, a Republican with Tea Party support, has come out in favor of removing the flag, but the final decision hinges on a vote by the state legislature.

Roof’s relatives said they had been asked many questions about the massacre.

“As more information becomes available, we will do our best to answer them,” read a statement widely circulated in US media.

“We would like to take this time to reflect on the victims and give their families time to grieve. We feel it would be inappropriate to say anything at this time other than that we are truly sorry for their loss.”

In Washington, US Attorney General Loretta Lynch said it was too early to say whether Roof is liable to face federal civil rights charges.

A hate crimes investigation is unfolding, she said, but “it’s simply premature at this point to be able to announce” how the case will be handled.

Roof has been charged with nine counts of murder, one for each victim, and he is being held in solitary confinement.