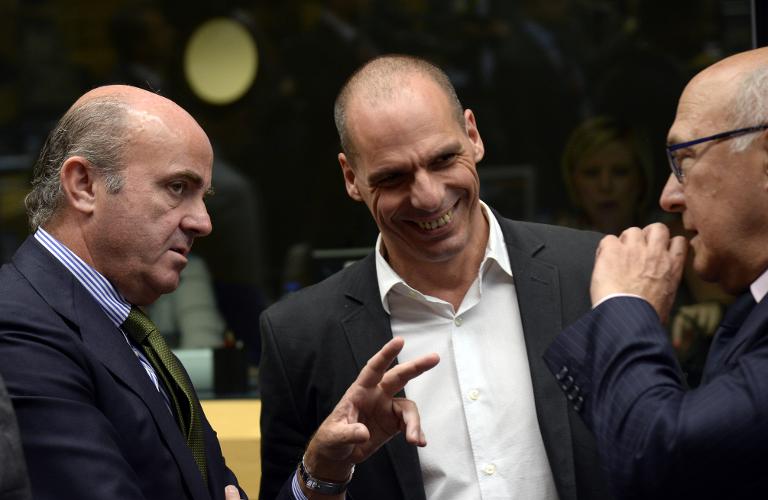 Greece and its EU-IMF creditors once more failed to break the deadlock in emergency bailout deal talks Thursday, sending the crisis hurtling towards a critical weekend meeting in a bid to avoid a default by Athens.

Eurozone finance minister talks which were meant to pave the way for EU leaders to endorse an accord on releasing vital aid at a summit in Brussels broke up abruptly with no agreement on a Greek financial reform plan.

They will now meet again on Saturday, just three days before Greece is at risk of missing a 1.5 billion euro ($1.7 billion) International Monetary Fund payment that could trigger its exit from the single currency and even the EU.

“We have not made the necessary progress. In some areas one even gets the impression that we have moved backwards,” Germany’s hardline Chancellor Angela Merkel told reporters as she arrived for the Brussels summit.

The 28 EU leaders at the summit held an unscheduled two-hour discussion on the Greece crisis where they and leftist Greek Prime Minister Alexis Tsipras were able to air their views, an EU official said.

Jeroen Dijsselbloem, the head of the Eurogroup of eurozone finance ministers, also briefed the leaders and said that lower-level negotiations between Greece and its creditors would continue until Saturday, the official said.

Marathon meetings between Tsipras, whose anti-austerity Syriza party won elections in January, and the heads of the European Commission, European Central Bank and International Monetary Fund, Greece’s main creditors, ended with no deal on Thursday morning.

In a sign of the passions involved, dozens of anti-austerity protesters waving Greek flags gathered at the police barricades around the summit and chanted slogans against the “Troika”, as the three creditor institutions used to be known, an AFP reporter said.

Asia’s leading stock markets slid Thursday as traders awaited the outcome of the fast-changing negotiations while most European markets ended steady after a riding a rollercoaster of small gains and drops.

Greece needs creditors to unlock the remaining 7.2 billion euros in its bailout to pay the IMF at the end of the month but the lenders have refused until Athens agrees to new reforms.

Tsipras, who has vowed to defend pensions and resist spending cuts after five years of bitter bailout austerity, insisted that a deal was still possible.

“After the comprehensive Greek proposals, I’m confident we’ll reach a compromise that will help the eurozone and Greece to overcome the crisis,” Tsipras said as he arrived at the summit.

He was later seen laughing and joking with Merkel and Italian Prime Minister Matteo Renzi.

EU President Donald Tusk — who last week warned of the growing risk of a “chaotic, uncontrollable Grexident” — said on Thursday that he saw the possibility of a “happy end” to the talks, comparing them to a drama by the Greek playwright Sophocles.

But there were few smiles among the finance ministers after their talks broke up.

Greece’s outspoken Finance Minister Yanis Varoufakis said some of his counterparts had also “criticised not only our text but also the text of the (creditor) institutions.”

The IMF meanwhile said that it believes Greece will make the payment.

Talk of a default is “all speculation, because we’re expecting the payment to be made on June 30 and that’s what the Greek authorities have said publicly,” said IMF spokesman Gerry Rice.

Rice added that if the payment is missed Greece will immediately be declared in arrears, cutting its access to IMF aid.

New plans submitted Sunday by Greece aim make eight billion euros in savings, mostly through new taxes on the wealthy and businesses, VAT increases and a cut in defence spending.

But in counter-proposals handed to Greece on Wednesday, creditors call for further measures on pensions, higher value added tax for restaurants, and for defence expenditure to be slashed by 400 million euros instead of the proposed 200 million euros.

Athens has awarned any accord would need to be approved by parliament, probably on Sunday, which risks splitting Tsipras’s Syriza party, where many view him as reneging on campaign promises.

Any Greek agreement must also look to the future, with EU officials suggesting an extension of the bailout until the end of the year, followed by a possible third aid package to keep Greece afloat.