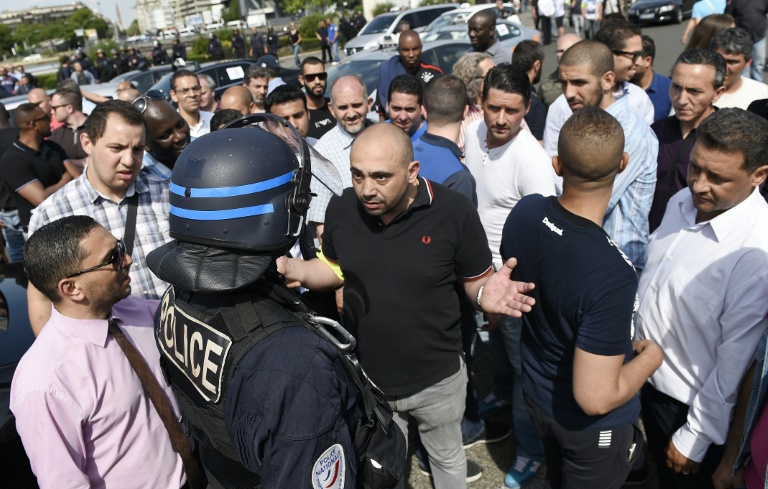 French President Francois Hollande on Friday condemned violent protests against ride-booking app Uber after taxi drivers set fire to vehicles and blocked highways but he said the service should be taken off the road.

Hollande described the demonstrations, in which US rocker Courtney Love was caught up, as “unacceptable violence in a democracy, in a country like France.”

But Hollande, attending an EU leaders summit in Brussels, added: “UberPOP should be dissolved and declared illegal.”

The service has been illegal in France since January, but the law has proved difficult to enforce and it continues to operate.

Around 3,000 cabbies took part in the strike Thursday, blocking access to the capital’s Charles de Gaulle and Orly airports, and preventing cars reaching train stations around the country.

Ten people were arrested, seven police officers were injured and 70 vehicles were damaged in clashes between Uber drivers and taxi drivers.

Taxi drivers are furious at what they see as unfair competition from Uber, which puts customers in touch with private drivers at prices lower than those of traditional taxis.

Interior Minister Bernard Cazeneuve said after meeting taxi drivers’ unions following a fraught day: “UberPOP is an illegal service, it must be closed down.”

Until that was done, “the vehicles of UberPOP drivers should be systematically impounded when they are openly breaking the law”, the minister said.

“Governing the country will never be done by the law of the jungle,” Cazeneuve added.

One of the taxi drivers’ representatives, Ibrahima Sylla, described the minister’s words as “promises, again” and said the drivers were considering continuing the demonstrations.

Most cabbies heeded their unions’ calls to return to work on Friday, but around 40 die-hards remained at the busy Porte Maillot junction in western Paris.

“The drivers decided to keep up the action because we didn’t get anything, only some things to regulate the (drivers) on the black market, which is in any case banned,” said Khalid, a driver.

Love, Kurt Cobain’s widow, was caught up in a confrontation near Charles de Gaulle airport on Thursday.

She tweeted that protesters “ambushed” her vehicle and “were holding our driver hostage”.

She appealed to the French president in another message, writing “Francois Hollande where are the fucking police???”

“This is France?? I’m safer in Baghdad,” she added.

In the most serious incident in Paris, one private chauffeur, who said he did not work for Uber “or any other app” was dragged from his van when he reached a blockade in the west of Paris.

Angry taxi drivers slashed the tyres of his vehicle, smashed a window and then set it and a chauffeur-driven van on fire.

Police eventually fired teargas to break up the protest on the western stretch of the ring road around the capital and cleared burning tyres.

Licensed cabbies say Uber is endangering their jobs by flooding the market with low-cost drivers.

One driver said the strikers had been driven to desperation.

“Taxi drivers — alright, they’ve got big mouths — but normally they’re not aggressive,” said Malia, 50, who has driven a taxi for three years.

“But these guys have families to feed, debts. They’ve been pushed to the brink.”

Cabbies argued that the disruption was justified.

Taxi drivers in France, like their colleagues in several other countries, have held a number of protests against the app — some of which have turned violent.

On at least two occasions in Strasbourg in eastern France last week, taxi drivers posed as customers in order to lure Uber drivers to isolated spots where they were assaulted by cabbies and their vehicles damaged.

In Paris, the government tried to strengthen its hand on Wednesday by obtaining a court order banning Uber from operating in the capital, but the company dismissed the move.

“We will fight it (in the courts) and we’ll see what happens on appeal. For the time being it changes nothing, UberPOP can continue to operate,” the head of Uber France, Thibaud Simphal, told the BFM Business channel.

However, its drivers do not pay taxes, do not need to undergo the 250 hours of training mandatory for French cabbies and do not require the same insurance as taxis.