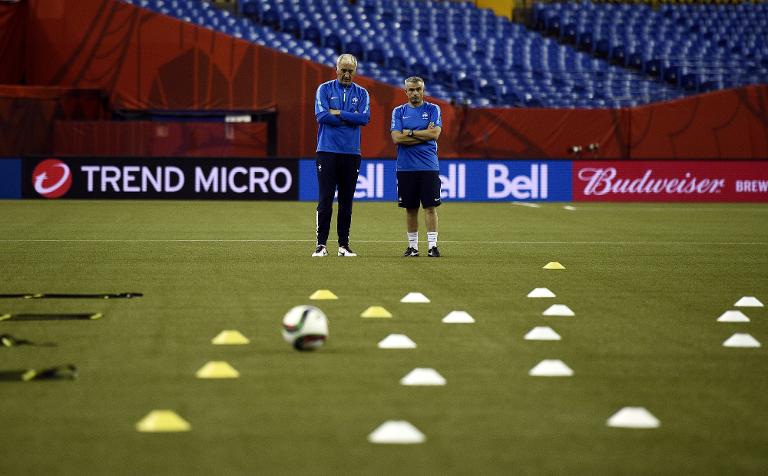 France coach Philippe Bergeroo could be preparing his side for a military campaign as they take on top-ranked Germany in the quarter-finals of the Women’s World Cup on Friday.

“They need to be ready for physical combat, they need to be focussed on detail and to have no regrets at the end,” said Bergeroo at the team’s pre-match press conference.

“A steamroller, it’s true Germany will exert huge physical pressure. We have other qualities but in the first 20 minutes we’ll have to be very present in the duels,” he continued

“We’re playing against the team that is classed first in FIFA so we are the outsiders but we have a lot of ambition for that game.”

France will be bidding to pull off the greatest exploits in their history in Montreal’s domed Olympic Stadium.

If the French want to lift their first title on July 5 in Vancouver they have to beat the best and Germany are the best.

Champions in 2003 and 2007, eight-time European champions, Silvia Neid’s side have what it takes to scare ‘les Bleues’ and have for a long time.

“I remember when I was 17 years old. You lost 3-0, didn’t get a touch on the ball and returned home. They were really physically a class above the rest,” recalled forward Eugenie Le Sommer.

But today, despite having never won an official match against their “best enemies,” as defender Griedge Mbock Bathy terms the Germans, France believe they are equals.

Goalkeeper Sarah Bouhaddi goes even further: “There is no feeling of inferiority. Very sincerely I think that we are better.”

Germany have scored 19 goals in four games — albeit 10 of those came against African minnows Ivory Coast — and have not lost a game so far although they were pushed to a 1-1 draw by former champions Norway.

France by contrast have won three games but were shocked 2-0 by Colombia in their second group match.

And Bouhaddi will have her work cut out faced with a strike force duo of Celia Sasic and Anja Mittag, who have scored five each so far.

“They have a cabinet full of trophies and we’ve nothing. The balance of power is quickly summed up. As it stands we have two draws and a win,” said Mbock Bathy.

But captain Wendie Renard was quick to point out a 2-0 friendly win in Offenbach does not compare to the world stage.

“We’re off to a good start but we have to make it gel now, it’s one thing to win friendly games but this is a different context.”

“Who says Germany are better than France?” said a surprised Neid when asked about her side’s status as favourites.

“I did not say that, it will on depend how the team is on the given day whether we are better than France.”

And Neid admitted that the German side that beat Brazil in the 2007 final would not win the title in 2015.

“Women’s soccer has made quite a development since, the team from 2007 would not win today and even second or third place wouldn’t get that place today.

“Players play harder, are more skilled and better trained, games are faster. We have followed this trend in women’s soccer and now have these skills.”

France have the advantage of having played their last 16 victory over South Korea in Montreal while for the Germans it will their first time in the roofed Olympic Stadium.

The French can also count on support from the crowd in the largely French-speaking city.

“It’s a different feeling, we don’t have this in Germany that you play inside in the summer,” said Neid.

“I’m surprised a roof like this can’t be opened in the summer. It will be different for us.

“We also know the French fans will be there in force, they will be singing, they will be very loud, we cannot be distracted by that.

“We just have to play our game hoping we manage to score an early goal.”