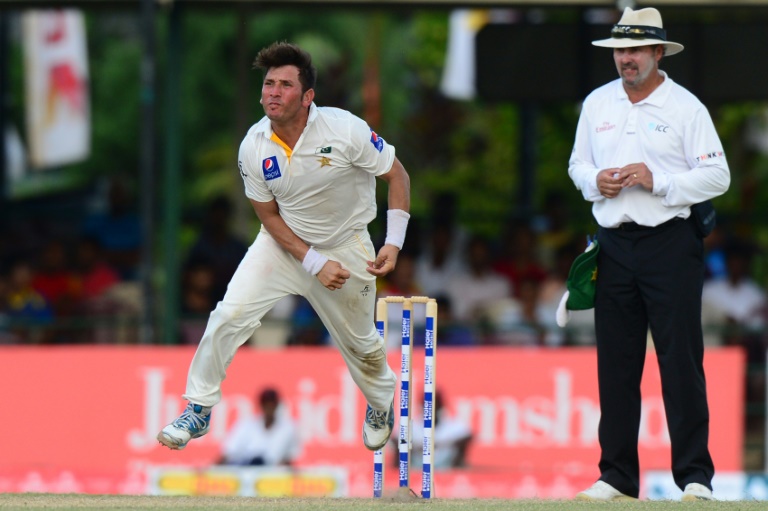 Leg-spinner Yasir Shah claimed five for 95 as Pakistan halted Sri Lanka’s march towards a big first innings lead in the second Test at the P. Sara Oval in Colombo on Friday.

Shah made up for the absence of injured pace spearhead Wahab Riaz to keep Sri Lanka down to 304-9 by stumps on the second day in reply to the tourists’ modest 138.

Opener Kaushal Silva top-scored with 80 and skipper Angelo Mathews made 77, but Sri Lanka lost six wickets for 112 runs after at one stage being 191-3.

Rangana Herath (10) and last man Dushmantha Chameera (0) will resume on the third day with their team leading by 166 runs on a pitch that is giving spinners plenty of bounce and turn.

Pakistan missed Wahab, who has been ruled out for the rest of the series with a hairline fracture in his left hand that he received while batting on Thursday.

Wahab bowled nine overs on the first day but did not take the field on Friday, leaving Pakistan one strike bowler short.

He had Lahiru Thirimanne caught at short-leg by Azhar Ali for seven before lunch, and then bowled both Dinesh Chandimal (one) and Kithuruwan Vithanage (three) in the afternoon session.

Yasir’s dismissal of Mathews gave the leg-spinner his 50th wicket in only nine Tests, making him the fastest among Pakistani bowlers to reach the mark.

Yasir said he derived his confidence from an encouraging tweet by Australian leg-spin legend Shane Warne, whom he regards as his idol.

Warne had tweeted last year after watching Shah bowl on television: “I like the look of this leggie Yasir Shah, plenty of energy and nice variations of pace.”

“His words actually put me under pressure to live up to his appreciation and it has been good so far,” the 29-year-old Yasir said.

“The focus remains on bowling a good line and length and control my variations. One needs to be patient in Test cricket and that is what I am trying to do.”

Yasir said losing the services of Wahab hurt his team, but he remained confident that the Test was not out of Pakistan’s reach.

“We are a bowler short because of the injury and the need is to contain Sri Lanka’s lead,” he said. “The pitch is still playing well, but it will offer more for the spinners on the last two days.”

Silva, who hit a century in Galle, once again anchored the team’s brittle batting.

Silva and Mathews put on 72 for the fourth wicket to take the score to 191-3 when three wickets crashed in the space of 11 runs to open up the tail.

Silva was run out when he drove Zulfiqar Babar to mid-on and charged down the wicket for a sharp single, only for Mathews to send him back.

Kumar Sangakkara, who resumed on 18 at the team’s overnight score of 70-1, made 34 when he attempted a big hit off left-arm spinner Babar and was caught at long-on by Asad Shafiq.

Sangakkara, 37, has still not responded to media speculation that he will retire after playing the first two Tests against Pakistan and one against India in August.

Sri Lanka were tottering at 202-6 when tailender Dhammika Prasad helped Mathews add 73 runs for the seventh wicket to boost the total.

Both batsmen were dismissed in successive overs as Prasad was trapped leg-before by Mohammad Hafeez for 35 and Mathews fell in similar fashion against Yasir.

Hafeez, who was reported after the Galle Test for a suspect action and is likely to be tested next week, sent down 10 economical overs that cost only 19 runs.