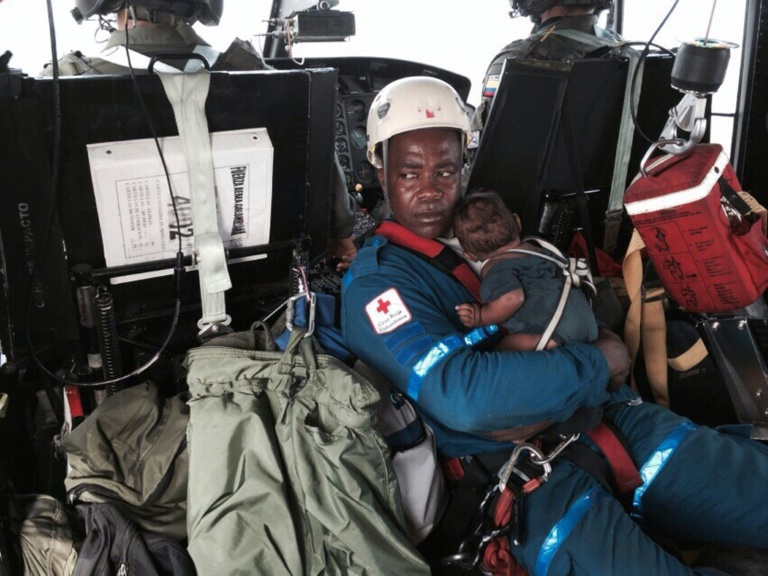 The memory of Maria Nelly Murillo’s mother and her own maternal instinct kept her going for five days as she fought to save her baby after their plane crashed in the Colombian jungle.

Murillo and her eight-month-old son Yudier Moreno made headlines around the world when they were found alive deep in the jungle five days after the small twin-engine plane transporting them crashed in northwestern Colombia.

“I just thought of my mom and my son,” according to Red Cross volunteer Acisclo Renteria on Thursday quoted the 18-year-old mother as saying.

Renteria found them on Wednesday, the last planned day of the search and rescue operation in a remote area of Colombia’s Choco region.

The crash killed pilot Carlos Mario Ceballos, the only other person aboard the plane, which was carrying a cargo of fish and coconuts but also served as an air taxi across the remote region.

Ceballos was crushed by the 225 kilograms (500 pounds) of fish he was transporting, said Renteria.

But Murillo and her baby, who were sitting in the back of the Cessna 303, somehow survived. She managed to get out the plane’s door as it burned and hurry to safety with her son.

Renteria, 38, and three other rescuers found Murillo sleeping beside her baby near a ravine where they had sought shelter in the thick Alto Baudo jungle.

She had first- and second-degree burns, a gash on her foot and a sprained ankle, but was very much alive.

Her baby escaped with his clothes slightly charred but no apparent injuries, said Renteria.

“‘Help! Help!’ was the first thing she said when she saw us,” said the rescue worker, who has volunteered with the Red Cross for 15 years.

“I said, ‘Stay calm, sweetie,’ because she was trying to stand up and couldn’t. She asked me for food and water,” he told AFP.

“The baby was cold, so I bundled him up in my shirt. He cried when I picked him up, but I gave him saline solution and he calmed down. After that, he slept in my arms the whole time.”

A picture of Renteria with baby Yudier in his arms, wearing a harness aboard the helicopter that transported them to the regional capital Quibdo, was published in newspapers worldwide.

The news drew a powerful reaction in Colombia.

“It’s a miracle. It is a very wild area and it was a catastrophic accident,” Colonel Hector Carrascal, commander of the Colombian Air Force in Antioquia department, told AFP.

“His mother’s spirit must have given him strength to survive,” he said of the baby.

Murillo hails from the region where the crash occurred.

The plane went down halfway between the town of Nuqui and Quibdo, a half-hour flight that locals often make by air taxi in this region where rivers are the only “roads” through the thick tropical forest.

Murillo managed to survive drinking river water and eating some food she had with her.

“She told me the only thing she did wrong was to stray from the crash site, because afterward she wanted to go back for the fish, but she got lost. But when she realized the pilot was dead, she got scared and wanted to get out of there,” said Renteria.

When she exited the plane, she realized her baby was extremely hot and managed to find a pool of water to cool him off, he said.

Later, when the flames had died down, she returned to the aircraft to get a machete and a coconut.

“She found her cell phone and the pilot’s. But one had no battery left and the other had no credit to make calls. Neither one worked,” said Renteria.

Murillo tried to place a call more than 90 times, but was unable, according to local media reports.

In the end, she decided to leave and seek help, hoping to cross paths with a local miner.

She spent five days in the jungle, breastfeeding her son until it hurt, said Renteria — who proudly revealed Murillo had asked him to be the boy’s godfather.

Murillo and her baby were undergoing medical checks at a hospital in second city Medellin.

Authorities are still investigating what caused the crash.