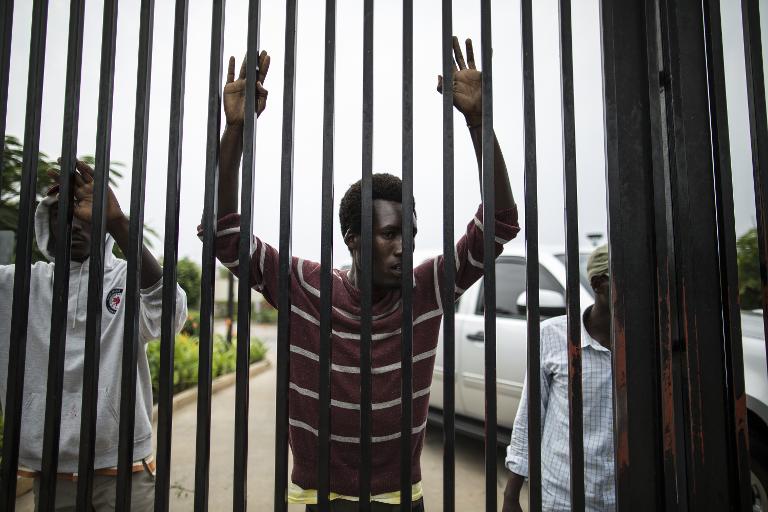 Burundian students sought refuge from the police at the US embassy Thursday as one of the country’s vice presidents announced he had fled to Belgium, escalating a political crisis in the central African nation days before key elections.

Ignoring armed US Marines watching from the roof of the mission in the capital Bujumbura, around 200 students climbed under the gate and over the wall, then sat down inside the compound with their hands raised.

The students sought refuge after police threatened to break up their camp outside the embassy compound where they had been sheltering for a violent weeks-long crackdown, an AFP photographer said.

US Ambassador Dawn Liberi later managed to convince the students to leave peacefully, with some returning to again camp outside the mission.

Bujumbura has been in turmoil since late April, when President Pierre Nkurunziza launched a controversial bid for a third consecutive term, triggering widespread protests and a failed coup attempt.

Two grenade blasts in Bujumbura on Thursday wounded at least eight people, the latest in a string of such attacks since the unrest began.

Parliamentary elections are due to be held on Monday, ahead of the presidential vote on July 15.

On Thursday, diplomats said international mediators had again called for a poll delay, suggesting that the elections all be held on July 31 – arguing that this would give both sides more time to resolve the crisis before Nkurunziza’s current mandate expires on August 26. The government, however, has so far rejected demands for a delay.

Nkurunziza launched his presidential election campaign, in front of thousands of cheering loyalists, but his bid was dealt a fresh blow after one of his deputies fled the country and urged him to quit power.

Second vice-president Gervais Rufyikiri told the president in a letter to “put the interests of the Burundian people before your personal interests.”

“Withdraw your presidential bid, because it violates the constitution,” the letter said.

In an interview from Belgium Rufyikiri told France 24 television he left because he was “not able to continue to support the attitude of the president, his desire to lead the people of Burundi on the path of illegality.”

Nkurunziza’s re-election bid has been branded by opponents as unconstitutional and a violation of a peace deal that paved the way to end 13 years of civil war in 2006, raising fears that of a return to widespread violence.

The reaction from Nkurunziza’s camp to Rufyikiri’s flight was defiant — wishing him “good riddance” and accusing him of links to coup plotters who tried but failed to oust the president in mid-May.

“Good riddance to him, all the more so because investigations have proved that Gervais Rufyikiri was mixed up in the failed coup attempt,” the president’s communications advisor, Willy Nyamitwe, told AFP.

“Someone of his rank, who was involved in an attempt to overthrow democratically-elected institutions… his departure is good riddance for us,” he added.

Rufyikiri had already been sidelined in the government, having joined other members of the ruling CNDD-FDD party earlier this year who had spoken out against Nkurunziza’s attempt to stay in office for another five years.

In his letter, Rufyikiri said the president was pushing Burundi into a “real socio-economic crisis”.

“You yourself had frequently said ‘In Burundi, there are the deaf’. History may well class you at the top of the list of this category, given the way you have turned your back on all those who have sent you messages advising you to abandon an unconstitutional third mandate,” he said.

Several other top officials — including members of the election commission and constitutional court — have already fled impoverished landlocked Burundi, joining at least 100,000 people in a refugee exodus to neighbouring Tanzania, Democratic Republic of Congo and Rwanda.

Last week, the Burundian human rights group Aprodeh said that at least 70 people have been killed, 500 wounded and more than 1,000 jailed since late April, when opposition supporters took to the streets to protest Nkurunziza’s re-election bid.

But speaking to supporters as he launched his campaign in Kirundo, a rural provinces where he still enjoys widespread support, the president asserted the country was “doing very well despite all the rumours.”

A presidential aide also said Nkurunziza promised a gathering of up to 15,000 supporters that he would oversee the final stages of Burundi’s “process of reconciliation.”