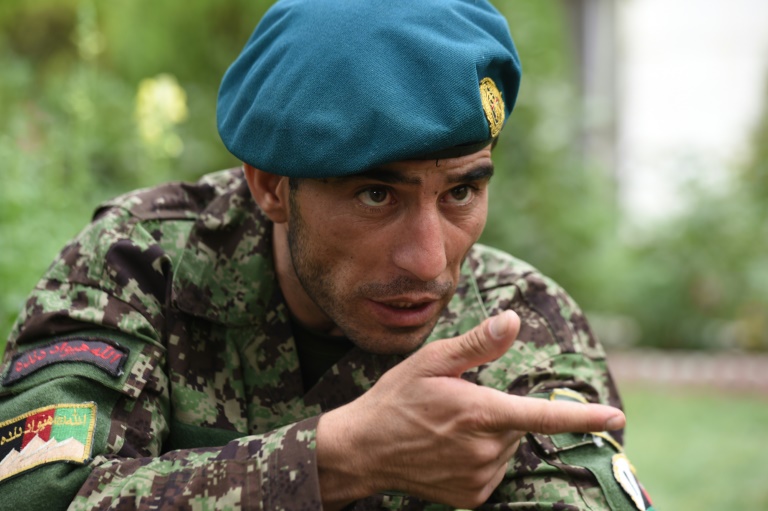 He is called a superhero and feted with financial rewards from Afghan politicians, but the lionisation of the soldier who singlehandedly killed six attackers in parliament belies bubbling discontent over deteriorating security.

Essa Khan Laghmani, 28, was plucked from obscurity and catapulted to national fame this week after he shot dead the Taliban insurgents who on Monday launched a gun and grenade assault on the legislature, sending terrified lawmakers scurrying for cover.

“Taq Chapako!” — “Bang! and down” in Dari — meanwhile became an Internet meme after he used the phrase in television interviews to describe how he effortlessly knocked down his targets as though they were skittles in a bowling alley.

Laghmani’s feat offered a rare glimmer of good news during the Taliban’s annual summer offensive, which has sent civilian and military casualties soaring and threatened major cities for the first time in a decade.

President Ashraf Ghani awarded him a three-bedroom apartment, former warlord General Dostum gifted him a pickup truck and some lawmakers pledged him a month of their salaries and other cash rewards to offer their gratitude.

His posters are splashed around Kabul, a provincial governor has named a major thoroughfare after him and Afghanistan’s starstruck youth have posted poems on social media to extol his “heroism”.

“He killed six terrorists with six bullets. He saved the lives of MPs,” defence ministry spokesman Dawlat Waziri told AFP. “His bravery deserves to be celebrated.”

But the celebration of Laghmani — or unnecessary glorification, depending on who you ask — glosses over growing public angst over a 13-year war that is inflicting a heavy toll on ordinary Afghans.

“By hyping Essa Khan, the Afghan government (is trying) to hide its inability to prevent attacks on such a high-profile target in the capital,” said one Afghan user on Facebook.

“Khan has become a rich man. We saw MPs donating cash and their salaries to him. This assistance is not to honour his patriotism but to reward him for saving their own lives.”

War-weary Afghans are in for the bloodiest fighting season in a decade, experts say, with the stubborn Taliban insurgency spreading inexorably northwards beyond its traditional southern and eastern strongholds.

Afghan security forces, stretched on multiple fronts and facing record casualties, are struggling to rein in the militants even as the government makes repeated efforts to jump-start peace negotiations.

“The Afghan government is desperate for something to cheer about — and perhaps something to distract people from how frightening the situation is,” said Heather Barr of Human Rights Watch.

“They are also desperate to bolster the morale — and the perceptions — of the security forces,” she told AFP.

Laghmani, a slender but well-built army sergeant wearing a slanted beret, recalled the moment he turned into a national sensation.

“I pointed my gun at the terrorists and said Bismillah (in the name of god), and then ‘Taq Chapako!’,” he told AFP in the parliament complex.

“My friends say if the enemy ever catches me they will skin me alive, but I feel no fear. I am only concerned that these cowards might try to harm my family,” said the father-of-three.

Since the attack, “Taq Chapako” has even appeared on car bumper stickers and inspired online poetry.

But Essa Khan was there to greet them;

Reaching for his M-16, he vanquished them instantly;

“Afghanistan is hungry for heroes, and this soldier has been wholeheartedly embraced for that very reason,” said Michael Kugelman, Afghanistan expert at the Washington-based Woodrow Wilson International Center for Scholars.

Through Laghmani, Afghanistan is trying to convey a message to sceptical international donors, he said.

“In essence, Afghanistan is saying: ‘It’s still worth funding us because we have the personnel to get things done’,” Kugelman told AFP.

But Laghmani’s popularity has stirred resentment among his peers, leaving many quietly seething over the lack of recognition for hundreds of soldiers whose sacrifices go unnoticed.

“I was in the same room as Laghmani, shooting multiple rounds at the enemy and protecting the parliament,” one soldier told AFP.

“Afghan soldiers die every day, performing bigger heroic acts. Most of them don’t get gifts and cash rewards.”