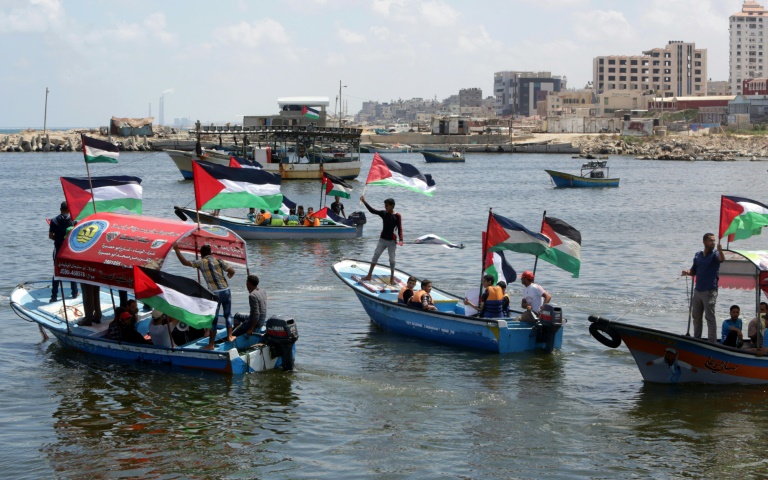 Activists set sail Friday for the Gaza Strip in a bid to break Israel’s blockade of the Palestinian territory, a participant said, five years after a similar attempt ended in bloodshed.

“Finally, we are aboard the Swedish freedom boat the Marianne, and we are on our way to Gaza,” Arab Israeli lawmaker Basel Ghattas announced on his Facebook page before the flotilla left the coast of Crete.

The Marianne of Gothenburg is part of the so-called Freedom Flotilla III — a convoy of ships carrying pro-Palestinian activists including Ghattas, a former Tunisian president and at least one European lawmaker.

In a similar bid in 2010, a botched pre-dawn raid by Israeli commandos killed 10 Turkish activists.

Several attempts since then have all been thwarted, but without bloodshed.

The Marianne of Gothenburg last month sailed from Sweden to waters off Crete, where it was to be joined by a number of other vessels carrying around 70 people, according to the Platform of French NGOs for Palestine.

Another activist on the Marianne, Israeli-born Swede Dror Feiler, told an Arab Israeli radio station that one of the flotilla’s ships had been sabotaged by “professionals”, and that a propeller had to be fixed before setting off.

“There are dark forces that are trying to stop us,” he told Radio Ashams, without elaborating.

The ministry had been working “through diplomatic channels night and day” to prevent it from reaching Israeli waters, she said.

A statement Friday from the flotilla’s media team said its goal was “to highlight the violation of the rights of 1.8 million Palestinians living in the world’s largest open-air prison.”

In July-August 2014, a 50-day war between Israel and Gaza rulers Hamas — the blockaded territory’s third conflict in six years — killed 2,200 Palestinians and 73 on the Israeli side, and left 100,000 Gazans homeless.

Israel imposed its blockade on Gaza in 2006 after Hamas captured an Israeli soldier, and tightened it a year later when the Islamist movement consolidated control of the Strip.

A number of flotillas had reached Gaza prior to May 2010, when 10 Turkish activists aboard the Mavi Marmara were killed in the Israeli raid on the six-ship flotilla.

Since then, several ships manned by pro-Palestinian activists have tried to reach the shores of Gaza, but they have all been repelled by the Israeli navy.

UN Secretary-General Ban Ki-moon said Wednesday he believed “a flotilla will not help to address the dire situation in Gaza,” but reiterated his call on Israel to “lift all closures, with due consideration of Israel’s legitimate security concerns.”

Aboard the flotilla, according to organisers, were former Tunisian president Moncef Marzouki and Spanish MEP Ana Maria Miranda Paza.