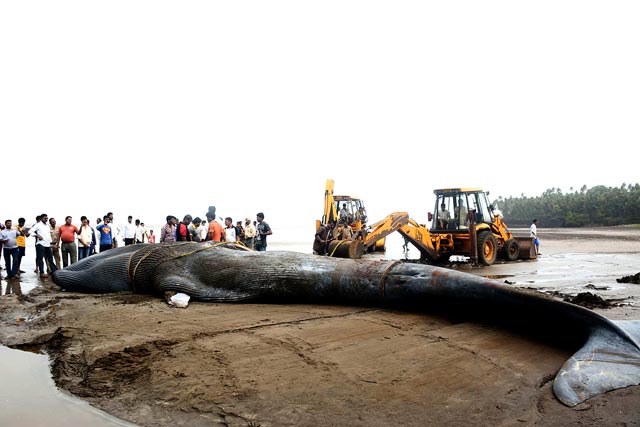 Alibaug (Mumbai): A 42-feet-long blue whale, the largest extant animal and among the heaviest existing species on the earth, was washed ashore and later died of its injuries.

The marine mammal, weighing about 20 tonnes, was washed ashore following high tide at the Revdanda sea shore, about 20 kms from Alibaug in Maharashtra’s Raigad district, on Wednesday.

The locals who spotted the whale lying in an injured condition informed the Raigad collector office and the fisheries officials.

The district authorities, revenue and fisheries officials brought in JCB machines on Thursday morning and tried to push the whale into the waters, but all efforts proved futile, Deputy Collector, Alibaug region, Deepak Kshirsagar said.

The huge weight of the whale and marshy beach posed a hindrance in the efforts to push the mammal into the sea. The whale died on Thursday at the sea shore.

Later, the JCB machines were deployed to dig the ground on the beach where the carcass was buried.

Another dead whale was washed ashore the Uran coast in Raigad about two months back. Prior to it, a dead whale was found on the shore of Diveaghar in the district some two years back.

Almost 20 types of whales are found in the Arabian Sea. There are two basic types of whales â€“ toothed and baleen. Baleen whales have a specialised filter in their mouths that blocks out dirt and other sea trash while these mammals drink the water.

Blue whales and Humpback whales, which were washed ashore in and around Mumbai coast earlier, belong to the baleen whale category.