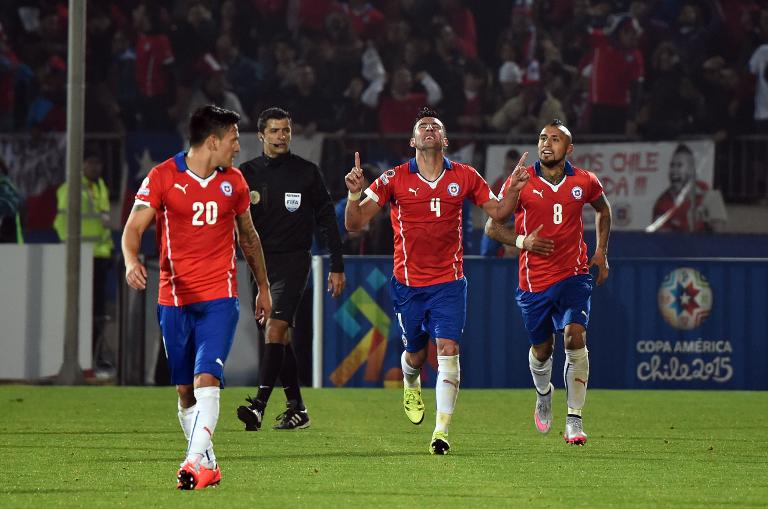 Chile sent nine-man Uruguay crashing out of the Copa America, winning a bruising quarter-final 1-0 as controversy over lurid provocation tactics rocked the tournament.

Fucile’s dismissal for a second yellow card in the closing minutes triggered a mass confrontation involving players and officials from both sides, with even Uruguay’s veteran coach Oscar Tabarez coming onto the pitch.

But the post-match commotion focused around the dismissal of Cavani, who flicked a hand into the face of Chile defender Gonzalo Jara after a clash midway through the second half.

Camera footage of the moments leading up to the flashpoint, however, appeared to show Jara attempting to insert his finger into Cavani’s anus, prompting the Uruguay player’s reaction.

Tabarez later defended the actions of the Paris Saint-Germain striker, arguing he had been provoked.

“For the expulsion of Cavani, you can see what happened and what the challenge was. I refer you to the television and photos of it, it is all there,” said Tabarez as images of Jara’s actions swiftly went viral on social media.

“I can see that the referee has not seen it, but the linesman had to be able to see it from his position.”

It is not the first time Jara has been involved in controversy involving a Uruguayan opponent.

In 2013, Luis Suarez punched the defender after the Chilean reportedly grabbed the Uruguay striker’s genitals during a World Cup qualifier.

Tabarez said the dismissal of Cavani, when the match was at 0-0, turned the tide against his team.

“We had the game under control but when we were left with 10 men it became a little more difficult because it limited our opportunities to attack,” said Tabarez.

It was a miserable end to the tournament for Cavani, who had been booked in the first half for aggressively confronting a linesman after a tackle involving Chile midfielder Arturo Vidal.

On Monday, Cavani’s father was arrested in Uruguay after his involvement in a fatal traffic accident which left a 19-year-old motorcyclist dead.

Uruguay reacted to Cavani’s dismissal doggedly, and had appeared to be on their way to taking the game to a penalty shoot-out with a superb defensive performance led by center-half Diego Godin.

But as the match entered the final 10 minutes, Chile pounced on Uruguay goalkeeper Fernando Muslera’s failure to clear a cross.

Chile playmaker Jorge Valdivia slipped a pass to Isla, who drilled in a low finish to spark wild celebrations.

It got worse for Uruguay a few minutes from time when Fucile clattered into Chile star Alexis Sanchez.

Uruguay protested that Fucile had played the ball but there was no denying that his trailing leg followed through on the Arsenal man.

Play was interrupted for several minutes as Uruguay’s players and officials protested but the red card stood.

Sanchez later revealed one unnamed Uruguayan player had said sorry to him for the rough treatment he had been given during a bruising encounter.

“They like to fight, argue, go forward all out; one player told me in the first half ‘Move you wimp’ — but then later he said to me: ‘I am sorry’,” Sanchez said, without identifying the opponent in question.

“He said to me, ‘That’ll do, I kicked the shit out of you’. And I said, ‘Alright but you could have caused an injury and that’s not what football’s about,'” Sanchez said.

Chile will now play the winner of Thursday’s quarter-final between Bolivia and Peru in the last four.