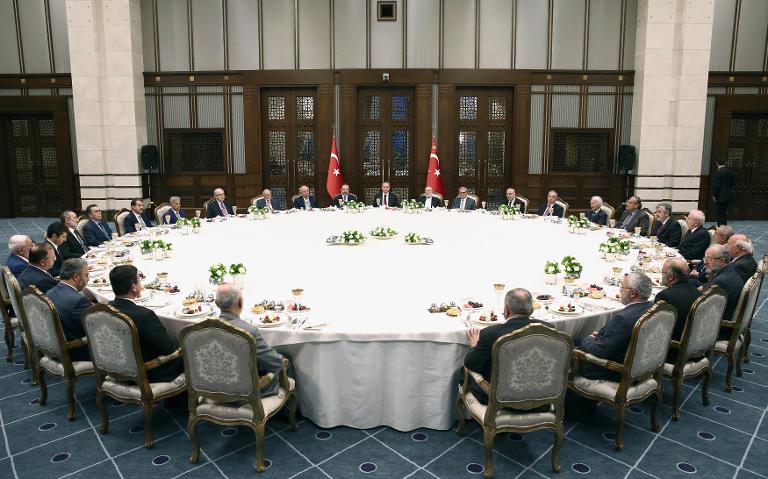 Already stung by accusations that his presidential palace in Ankara is a megalomaniac folly, Turkey’s President Recep Tayyip Erdogan is facing new claims of wasteful extravagance.

But this time the controversy does not surround a grand new building but a humble table set for the traditional fast-breaking iftar meal for the holy Muslim fasting month of Ramadan.

The circular table, however, is perhaps not so humble. The size of a squash court, it is so vast as to be impossible to have a conversation with the person at the other end.

The Ankara Architects’ Chamber — a frequent critic of Erdogan over the palace — gave an itemised valuation of the table, chairs, and ornaments, saying they were worth one million lira ($375,000).

The presidency however rubbished the suggestion, saying it was “black propaganda”.

“All these figures, stated per item, are wrong and a lie, all these claims are merely slander,” Erdogan said in a speech late Wednesday.

“We know their intentions and a full account will be given before the law,” he added.

The controversy erupted on Monday when the presidency published pictures of Erdogan and two dozen religious figures and scholars seated around the table for the iftar meal.

Seated as the head of the table, the president was only vaguely discernable from the other end.

Similar images emerged after an iftar meal Wednesday evening with municipal chiefs, with social media ablaze with suggestions over what to put in the vast empty space in the middle.

Some suggested a vast pizza, others that there was ample space for a traditional oil-wrestling match.

Meanwhile, the presidency took the hugely unusual step of issuing a one minute time-lapse video showing that officials at the palace assembled the table out of several smaller ones with a round table at the centre.

It then shows the white-jacketed palace officials sweeping the table clear and adding a vast table cloth and cutlery.

Erdogan said the tables used for the giant table were merely heirlooms from the 1993-2000 presidency of Suleyman Demirel, who died earlier this month. The chairs, meanwhile, were purchased under his predecessor Abdullah Gul.

Erdogan’s new $615 million presidential palace in the outskirts of Ankara, which has 1,150 rooms, has for opponents become a symbol of authoritarian tendencies.

The president insists however it’s a worthy symbol of the “new Turkey” he is trying to build.