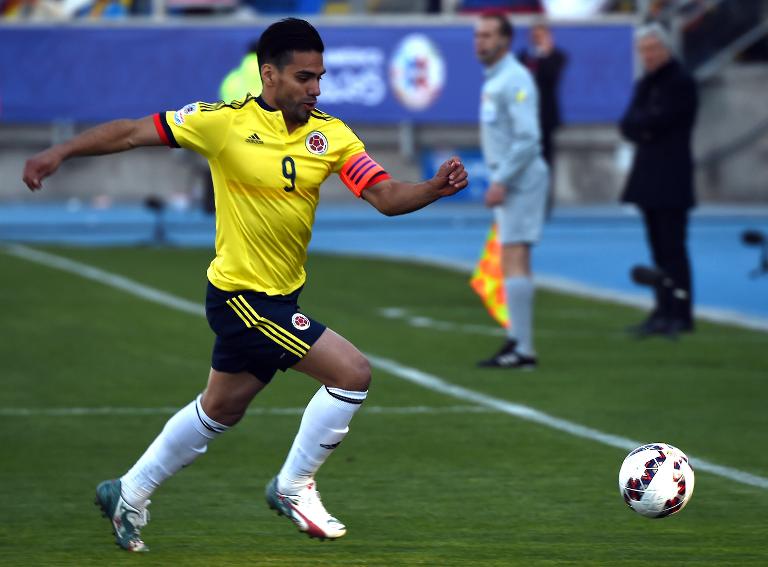 More than 200 minutes played and barely a sniff of a goal: Radamel Falcao’s miserable season with Manchester United has spilled over into Colombia’s misfiring Copa America campaign.

Yet while the man known as “El Tigre” has singularly failed to bare his teeth in Chile, he will once again wear the captain’s armband when Colombia line up for their quarter-final clash with Argentina on Friday.

Colombia coach Jose Pekerman is adamant that Falcao’s position is secure despite a series of performances which have left many wondering if the 29-year-old should make way for Porto’s Jackson Martinez.

Falcao was anonymous in Colombia’s upset opening defeat to Venezuela, had only two attempts on goal in the 1-0 win over Brazil and only a solitary effort in an uninspired 0-0 draw with Peru.

Moreover, Colombia instantly looked more threatening when the in-form Martinez replaced Falcao after an hour of the Peru clash on Sunday, his movement and physicality offering a sharp contrast to his off-song skipper.

Adding insult to injury, Falcao has also been widely mocked on social media for an incident early in the draw with Peru when he threw himself theatrically to the ground clutching his face after a challenge with Carlos Zambrano.

A video clearly shows Zambrano made no contact with Falcao, and has fuelled anxiety amongst fans of English champions Chelsea, who are widely expected to sign the struggling striker.

“We can’t be seriously considering signing him,” one Chelsea fan wailed on Twitter in response.

For now, however, Falcao remains a firm favourite with Pekerman, who is steadfast in his belief that form may be temporary but class is permanent.

“It’s true, some players haven’t really hit their top form, we’re not going to try and hide that,” Pekerman acknowledged.

“But we know who those players are and we know what they can do.

“I know it may be difficult for some people, but I think it is important to support the players who have talent,” Pekerman added, referring to Falcao, who has amassed 25 goals in 60 international appearances.

“If we want a team with a strong identity then we cannot allow ourselves to be swayed by pressure to change the players from one day to the next,” the Argentine added.

Falcao’s woes have left Martinez champing at the bit.

Martinez, who is expected to clinch a transfer to Atletico Madrid in the coming days, has enjoyed three successful seasons in Portugal, scoring 67 goals in the league, 13 goals in the Portuguese cup and 14 in European competition.

Pekerman however has urged patience, appearing to address Martinez’s frustrations in veiled comments earlier in the tournament.

“It’s important to wait for opportunities to arise and to be ready to take them when they do,” Pekerman said.