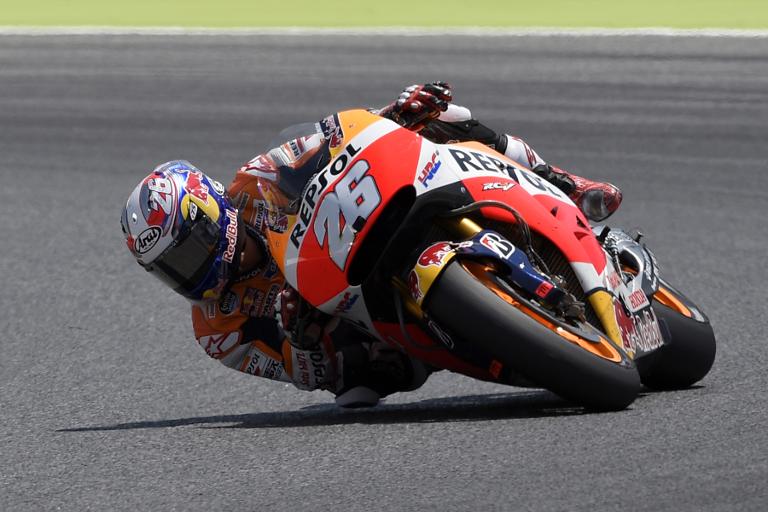 Pedrosa shrugged off temperatures close to 40 degrees to clock 1min 33.450sec to beat Marquez’s previous lap record of 1min 33.462 set last year at a track which has been been an ever-present in the world championship since 1949.

Rossi is bidding this weekend to win at Assen for the seventh time and break the tie for six he currently holds with legendary Italian compatriot Giacomo Agostini.

“It has been a good Thursday. Iâ€˜m happy because we worked well during the sessions and we found some interesting solutions,” said Rossi.

“The first priority was to find out which chassis we prefer, the new one or the standard one. I feel good with the new one.”

Marquez, who is down in fifth spot in the standings, 69 points behind Rossi, won in the rain in the Netherlands last year and endured a dramatic session on Thursday.

In the morning, he fell off his machine after just three minutes of action while, in the afternoon, he came close to contact with Rossi.

Spain’s Jorge Lorenzo, just a point behind Yamaha teammate Rossi in the title race after winning the last four races, was sixth on Thursday.

“We don’t have the softer edge tyre that Bridgestone usually brings. This certainly didn’t help me to feel at my best in the corners, but this is the same for everyone,” said Lorenzo.

Despite Pedrosa topping the time charts, there is less than one second separating the top 12 riders ahead of Friday’s qualifying session.