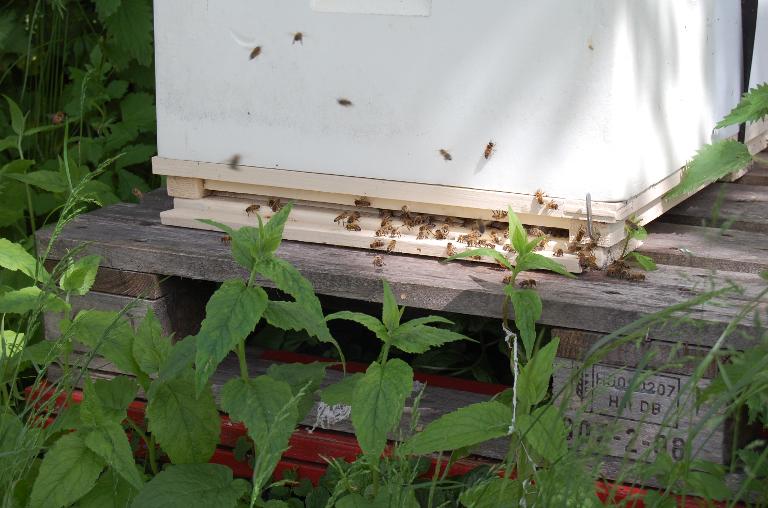 “We are constantly reshaping our environment to meet our needs, forgetting that other species also live in it,” Agnes Lyche Melvaer, head of the Bybi, an environmental group supporting urban bees, which is leading the project.

“To correct that we need to return places to them to live and feed,” she explained, sitting on a bench in a lush city centre square bursting with early Nordic summer growth.

With its sunflowers, marigolds and other nectar-bearing flowers planted by bee-loving locals and school children, Abel’s Garden was until recently covered only in grass but is now a floral “feeding station” for bees.

Oslo’s “bee highway” aims to give the insects a safe passage through the city, lined with relays providing food a shelter — the first such system in the world, according to the organisers.

Participants in the project — state bodies, companies, associations and private individuals — are invited to post their contribution on a website www.polli.no, which maps out the bees’ route across the city.

On the twelfth floor of an ultra modern office block in the capital’s chic business district on the edge of Oslo fjord, a major accountancy firm has covered parts of its terrace in brightly flowering Sedum plants and two bee hives.

It houses some 45,000 worker bees, busily unaware of their smart-suited office counterparts enjoying their lunch just metres away.

“One should see it as a sign that companies are also taking responsibility for preserving biodiversity,” said accountant and bee-keeping enthusiast Marie Skjelbred.

“The workers live about 60 days,” she explained with a glint in her eye.

“During their lives, they don’t produce more than a spoon of honey,” she added, before turning to her accountancy skills to do the maths.

Although Norwegian bees may not be as seriously threatened by intensive agriculture and pesticides as bees in the US or other European countries, a third of the country’s 200 wild bee species are nonetheless considered endangered.

And that is cause for concern for humans since 30 to 40 percent of food production requires pollination, a service provided for free by the insects which according to a 2005 Franco-German study is worth an estimated 153 billion euros.

Christian Steel at the Norwegian Biodiversity Network, which brings together the country’s professional and amateur biologists, supports the initiative but condemns the “short term policies” of Norwegian authorities.

“The government seems to hide behind these kinds of private initiatives, while pursuing in parallel a policy of promoting intensive agriculture which leads to the death of many bees,” he lamented.

“Agriculture is completely dependent on pollinators to maintain food production just as insects are dependent on diverse agriculture to survive. It’s a mutual dependence,” he added.

The mass destruction of bee populations around the world has already forced farmers in the Chinese province of Sichuan to pollinate plants by hand, and in the US some farmers are left with no choice but to rent hives transported cross-country by truck to pollinate crops.

But in Abel’s Garden in Oslo, Agnes Lyche Melvaer says she has faith in the “butterfly effect”.

“If we manage to solve a global problem locally it’s conceivable that this local solution will work elsewhere too.”