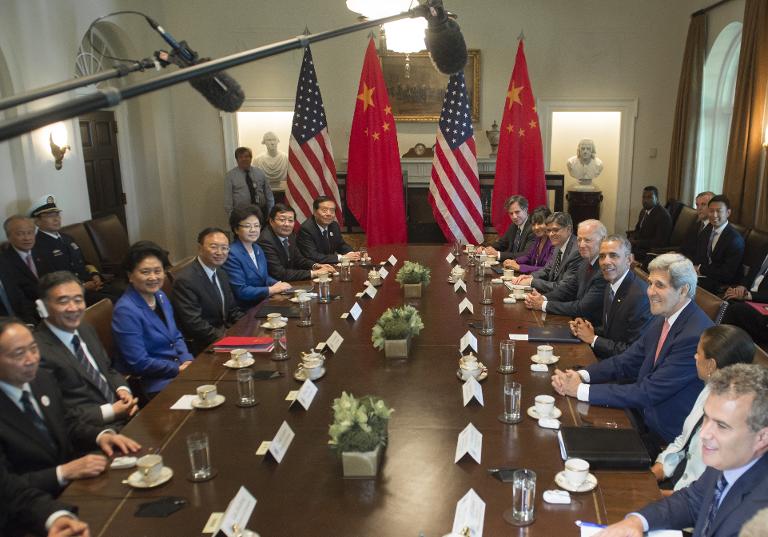 American officials have voiced deep concerns about both issues at the annual strategic and economic dialogue aimed at setting guidelines to steer future ties between the world’s two leading economies.

During talks in Washington with top Chinese officials, Obama “raised ongoing US concerns about China’s cyber and maritime behavior, and he urged China to take concrete steps to lower tensions,” the White House said.

Ties have strained over US accusations of cyber espionage and this week’s talks come after revelations of huge breaches of US government computer networks at the Office of Personnel Management.

Washington has also voiced concerns about China’s territorial claims to much of the South and East China Seas, calling on Beijing to resolve the issue peacefully with its neighbors.

But he said the issue was raised in an “honest discussion without accusations or finger-pointing, about the problem of cyber theft and whether or not it was sanctioned by government.”

The US had “made it crystal clear that this is not acceptable and we need to work through… how we are going to work this out in terms of the bilateral relationship.”

But China’s State Councilor Yang Jiechi called on the US to “respect and accommodate the concerns of China and handle differences and sensitive issues with caution.”

He said he “urged the US to respect facts and work together with China to improve the cyber relations between the two countries.”

It was important for the US “to respect China’a sovereignty and territorial integrity and respect the development path chosen by the Chinese people,” Yang said.

While Washington has repeatedly voiced deep concerns about rights and freedoms in the single-party country, Yang said that “in advancing human rights China’s achievements are there for all to see.”

But even though both sides have stressed they continue to have differences over various issues, they have also been at pains to emphasize that they can cooperate.

Kerry said this, the third round of talks which he has led, had been “one of the most constructive and productive.”

Areas where Beijing and Washington can collaborate include on nuclear non-proliferation efforts with Iran and North Korea, as well as in Afghanistan.

Earlier, the two countries also launched a joint initiative to protect the oceans, and vowed to step up efforts to combat illegal wildlife trafficking.

“We have a real opportunity here to be able to come together… to deal with conserving and protecting the oceans,” Kerry said, adding it could be “a centerpiece in the newly defining relationship with China.”

Yang agreed, saying the oceans were “a shared homeland of mankind, vital for our survival and development.”

The US and China are working together to try to create a marine protected area in Antarctica in the Ross Sea, Kerry said.

The United States has long sought to create a marine reservation in the Ross Sea stretching across 1.34 million square kilometers (517,400 square miles) in an area often referred to as the “Last Ocean” due to its pristine condition.

But to the dismay of conservationists, China blocked the move at a meeting in Australia last year.

On their burgeoning economic ties, the US side stressed the need for transparency and proper regulation for businesses.

The two countries discussed Beijing’s desire for the yuan currency to be given a greater global role such as being part of the IMF’s international basket of reference currencies. Washington has long said the yuan is manipulated and undervalued.

“China has committed to intervene in the foreign exchange market only when necessitated by disorderly market conditions, and to actively consider additional measures to transition to a market-oriented exchange rate,” Lew said.