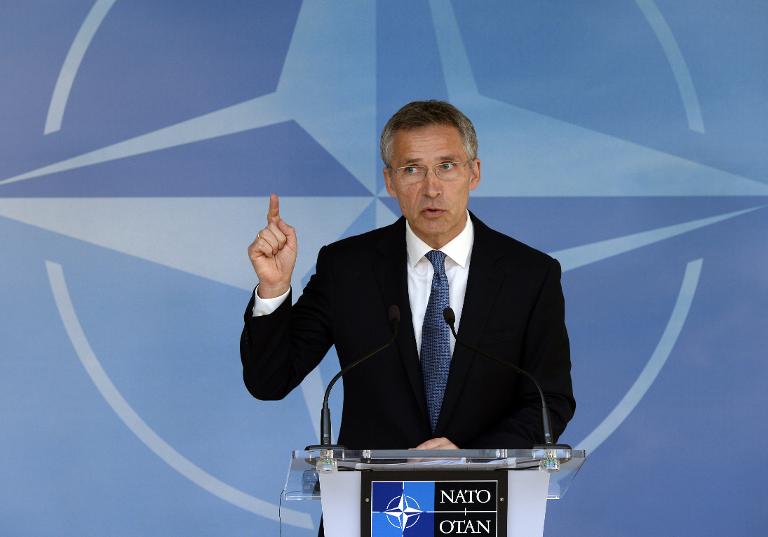 NATO head Jens Stoltenberg said Wednesday the alliance does not want to get dragged into an arms race with Russia but it had to boost its defences to counter Moscow’s “aggressive actions” in Ukraine.

He spoke after defence ministers approved a series of measures, including more than doubling NATO’s rapid response force, and Washington announced it would pre-position heavy weapons on the alliance’s eastern flank.

Russia has denounced the moves as Cold War-style provocations while upgrading its own armed forces, including with more than 40 new nuclear ballistic missiles this year.

“We do not seek confrontation; we do not want a new arms race,” Stoltenberg told a press conference after the first day of a defence ministers meeting at NATO HQ in Brussels.

He said ministers endorsed plans to increase the NATO Response force from 13,000 to up to 40,000 troops, including a spearhead unit of 5,000 soldiers.

“We also agreed to speed up our political and military decision-making… (giving) the supreme commander the authority to alert, stage and prepare troops” while waiting for the necessary political approval to deploy, he said.

A NATO diplomatic source said this meant the political decision could be taken in 12 hours, essential if the new spearhead unit was to get on the ground within the two to three day target.

Stoltenberg took a hard line on Russian actions in Ukraine, saying its March 2014 annexation of Crimea was “an act of aggression.”

“Russia continues to send troops, forces and supplies into eastern Ukraine. There is no doubt that Russia is responsible for aggressive actions in Europe,” he said at the opening of the meeting.

Stoltenberg played down fears of a return to the worst days of the Cold War, insisting that contrary to stoking tensions, NATO would have been remiss if it had not responded.

The alliance “continues to strive for more constructive relations with Russia,” he said.

Russia denies that it is directly involved in the 15-month conflict in Ukraine which has cost 6,500 lives.

To reassure nervous allies in eastern Europe once ruled from Moscow, NATO has increased exercises, deployed planes and ships and reinforced the message that it is ready and willing to stand by its core commitment to defend any ally under attack.

US Defence Secretary Ashton Carter said Tuesday that Washington would pre-position heavy weapons in central and eastern Europe to ensure any NATO troops responding to a fresh crisis would hit the ground running.

“While we do not seek a cold, let alone a hot war with Russia, we will defend our allies,” said Carter, attending his first NATO defence ministers’ meeting.

The US equipment includes some 90 Abrams main battle tanks, among the best in the world, 140 Bradley armoured vehicles and 20 self-propelled howitzers.

Estonia, Lithuania, Latvia, Bulgaria, Romania and Poland will store the equipment which will be moved around the region as required for training and exercises.

Russia charges that such deployments breach the 1997 Founding Act with NATO which bans the permanent stationing of significant forces and equipment in former Warsaw Pact states.

NATO says all such deployments are rotational and temporary. The three Baltic states last month called for a permanent NATO presence to deter Russia.

NATO leaders agreed at a September summit to boost defence spending to the equivalent of 2.0 percent of annual economic output after years of cuts following the end of the Cold War.

In contrast, “Russia has over many years invested heavily in defence,” he added.