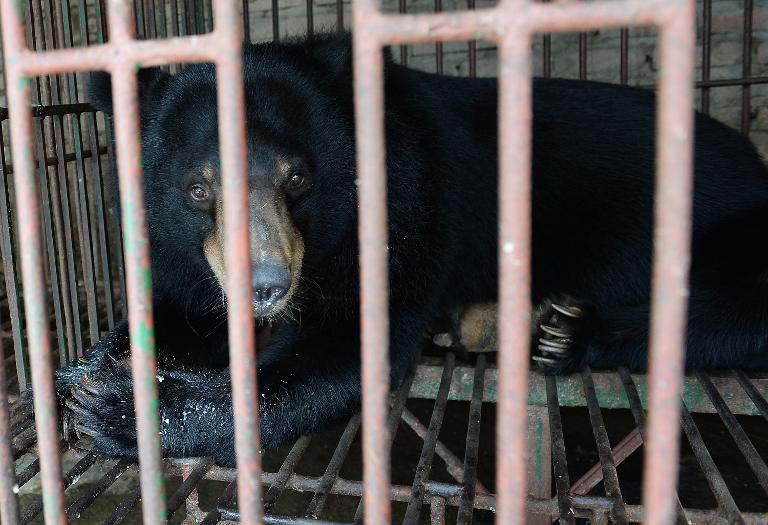 Freed from captivity in tiny metal cages, seven long-suffering Asiatic moon bears have been rescued on bile farms in northern Vietnam, as efforts to end the illegal trade are boosted.

Bear bile farming is banned but it is legal to raise the animals as pets — a loophole used by illicit Vietnamese farms to feed a regional demand for the digestive fluid, which is believed to possess healing properties in traditional Chinese medicine.

The bears were rescued from coastal Quang Ninh province earlier this week and were in extremely poor health with missing or maimed limbs after being confined in the small cages where, according to Animals Asia, they were likely milked for bile.

Rescuers either use honey to calmly coax the animals out of their pens into a transport cage, or dart them and stretcher them to the removal truck if they are unwilling to move.

The moon bears, so named for the distinctive yellow crescent-shaped mark on their chests, have since been transferred to the charity’s sanctuary in another province.

“We will keep on fighting and campaigning until every last captive bear suffering in the province has been moved to our sanctuary,” Bendixsen said.

Authorities in Quang Ninh, around 180 kilometres (110 miles) from Hanoi, ramped up their efforts to close down the longstanding industry after a flurry of deaths at bile farms drew attention to the animals.

Their plight even triggered a decree in March from Vietnamese Prime Minister Nguyen Tan Dung, who ordered all captive bears in the coastal province be moved to facilities with better care.

Quang Ninh is among the provinces with the highest rate of captive bears, Animals Asia said, partly due to demand for bear bile from Korean and Chinese tourists visiting its UNESCO-listed Halong Bay and the surrounding area.

Local authorities are still in negotiations with bile farmers for the release of around 16 bears that will still be in captivity after the current rescue mission ends Friday, Animals Asia said.

Nationwide, around 1,245 bears remain in captivity, according to the agriculture ministry.

In recent years hundreds have died due to maltreatment — the animals are routinely drugged and restrained for bile harvesters to collect liquid from their gallbladders with unsterilised needles.

With rising affluence Vietnam has become a top destination for people seeking to consume rare wildlife as well as wines and medicines from animals thought to have healing or aphrodisiac properties.

The country is also a major trafficking hub in Southeast Asia, linking animals sourced in countries including Laos, Cambodia and Myanmar with buyers in neighbouring China and other East Asian markets.

The communist nation has signed treaties against the trade but enforcement remains patchy, in part due to corruption.