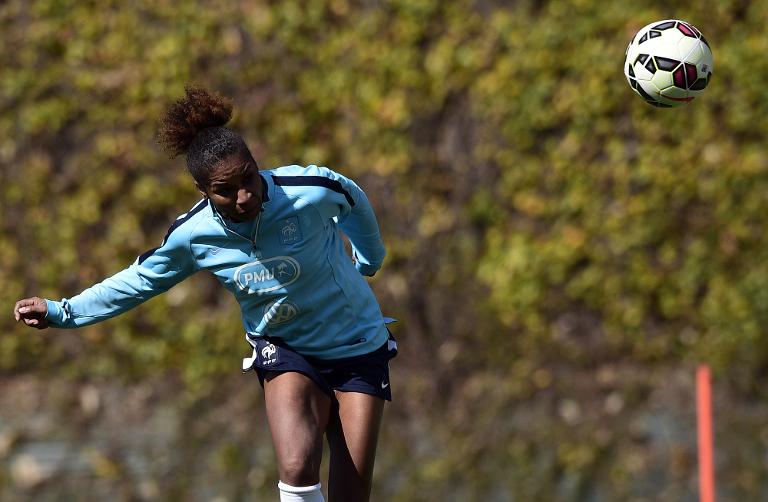 From the 2003 Women’s World Cup to the 2015 edition underway in Canada, Laura Georges has been in the thick of all the battles and tears of France’s national football team.

And on Friday the many talents of the 30-year-old centre back, whose family hail from the French Island of Guadeloupe, will be pushed to their limits in Montreal’s Olympic Stadium.

Third-ranked France take on world number one Germany, winners in 2003 and 2007 and with a third title in their sights, in a much-anticipated quarter-final clash.

Georges, the most experienced member of the France team with 163 caps, is competing in her third World Cup, the same number as France have qualified for.

In September 2003 in the United States, she discovered the World Cup for the first time as a 19-year-old against Norway.

In June 2015, further north in Montreal she marked her 163rd cap with qualification for the last eight, following an impeccable performance in a 3-0 win over South Korea.

From one match to another, one World Cup disappointment to another, the player from Le Chesnay, in the western suburbs of Paris, has played in all of France’s World Cup games — 13 in total.

“It’s good for the statisticians and journalists, but I’ve never won anything and it would be good to leave with something,” said the player who started her footballing career as a 12-year-old with Paris Saint-Germain and returned to the club two years ago after ten seasons with Lyon.

France coach Philippe Bergeroo – the third she has played under after Elisabeth Loisel and Bruno Bini — has praised the unrelenting work ethic of Georges who won her first cap in September 2011.

“Laura, it’s experience and power. But it’s above all a state of mind always in tune with the team and the group.

“In this World Cup, she is very, very focused. She comes to look for the individual videos, those of her direct rivals, those of the rival teams. She’s a super professional.”

When she looks back at her introduction to the World Cup in 2003, the player whose career was always ‘sponsored’ by former men’s World Cup winner Lilian Thuram — his roots are also in Guadeloupe — recalls an “unusual” tournament “transferred from China to the United States at the last minute”.

“So I don’t think that they could organise it as they would have liked with all the prestige that you expect surrounding a World Cup.

“But nevertheless, at 19 being called up to a World Cup and playing all the matches is an honour many don’t have,” she told AFP.

The 2011 edition in Germany by contrast “was a big event, really something with the ‘wow’ factor.

“And for the French team as well, even if we finished just off the podium (in fourth), it was really a beautiful adventure.”

Between her first tournament and today the margin between the top teams and Les Bleues has progressively narrowed, she said.

“It’s no longer the same. The France team have gained in experience and confidence.

“There are results at club level with Lyon who won the Champions League (2011 and 2012), which has seen this inferiority complex regarding the top teams start to disappear.

“We showed that we could beat German teams and that we have players in France who can win big matches.”

Georges admits that over the years she has “matured in age and experience” as a player.

“In my game that has been transformed into a lot more skill and serenity. That’s important above all in my position (defender). More reflective, you play less with your physique and a little more with the head.”

Against the Germans, Les Bleues will need all that — the physical and mental strength of Georges and an experience accumulated in three World Cups and almost 15 years service to France, who host the tournament in 2019.