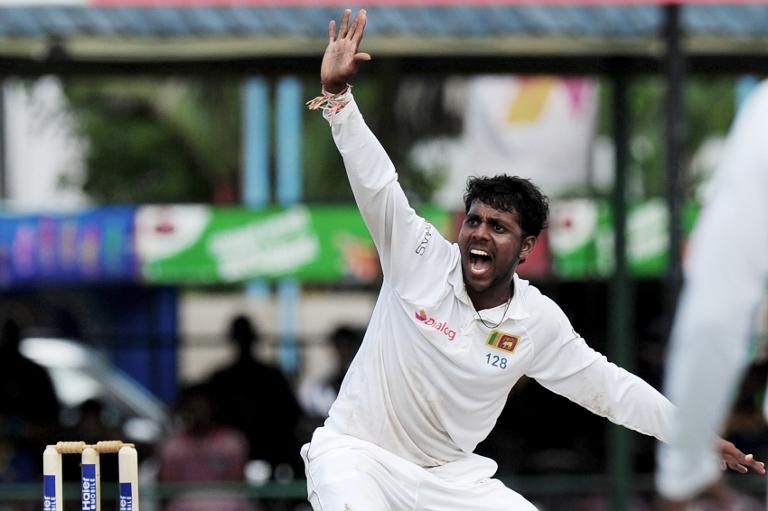 Young off-spinner Tharindu Kaushal grabbed five wickets as Sri Lanka bundled out Pakistan for 138 on the opening day of the second Test against Sri Lanka in Colombo on Thursday.

Seamer Dhammika Prasad chipped in with three wickets as the tourists collapsed in 42.5 overs by tea after skipper Misbah-ul Haq elected to bat on a fresh, bouncy pitch at the P. Sara Oval.

Sri Lanka, looking for a series-levelling win after losing the first Test in Galle by 10 wickets, were 70 for one at stumps and well set to build a big first innings lead.

Kumar Sangakkara was unbeaten on 18 and Kaushal Silva was on 21 after Dimuth Karunaratne was caught behind for 28 while trying to slash a wide ball from seamer Junaid Khan.

Kaushal, a 22-year-old playing only his second Test match, finished with five for 42 runs in 10.5 overs of accurate spin bowling in helpful conditions.

“It was good to bowl on this wicket,” said Kaushal, who regards fellow off-spinner and world bowling record holder Muttiah Muralitharan as his hero.

“I occasionally bowled the ‘doosra’ and even managed to pick up a wicket with it. I am happy I was able to help the team do well on the field,” he added.

Mohammad Hafeez top-scored with 42 as Pakistan lost eight wickets in the afternoon session after resuming at the lunch score of 70 for two.

Pakistan coach Waqar Younis insisted the decision to bat first was correct because it was a good pitch to bat on.

“There were no demons in the pitch,” the former fast bowler said. “Our shot selection was poor and Sri Lanka bowled well too. But we should have got a lot more runs than we did.

“Our bowlers too kept the runs in check and we need to continue the same way tomorrow.”

Prasad, who took the field despite having suffered a finger injury during net practice on Wednesday, struck with the first ball of his second over to make it five for one.

He forced Ahmed Shehzad to edge a rising ball to second slip where the 37-year-old Kumar Sangakkara dived to his right to pick up a low catch.

Azhar Ali, who put on 46 for the second wicket with Hafeez, was dismissed for 26 when TV umpire Paul Reiffel upheld Sri Lanka’s review for an edge off Prasad after on-field official Richard Illingworth had turned down the appeal.

Younis Khan, making his 100th Test appearance, survived a confident leg-before appeal on zero, but was caught behind by Dinesh Chandimal off Prasad for six in the first over after lunch.

Kaushal began his wicket hunt by bowling Hafeez in his fourth over and, six deliveries later, trapped Asad Shafiq leg-before for two as the tourists slid from 74-2 to 95-5.

A sharp shower just as Shafiq was walking back to the pavilion halted play for an hour, but Pakistan’s woes multiplied on resumption.

Misbah ran himself out after making seven, failing to regain his ground after dashing down the wicket for a sharp single which was refused by non-striker Sarfraz Ahmed.

Sarfraz, the batting hero of Pakistan’s victory at Galle, made 14 when he edged a drive off Kaushal on to his pad and the ball lobbed to Angelo Mathews in the slips.

Kaushal then claimed Wahab Riaz leg-before through a review after umpire Sundaram Ravi had turned down a loud shout from the bowler and the close-on fielders.

Zulfiqar Babar was bowled to give debutant seamer Dushmantha Chameera his first Test wicket, before a fine running catch at long-on by Sangakkara to dismiss Yasir Shah terminated the innings.

Pakistan retained the same side that won the first Test to take the lead in the three-match series.