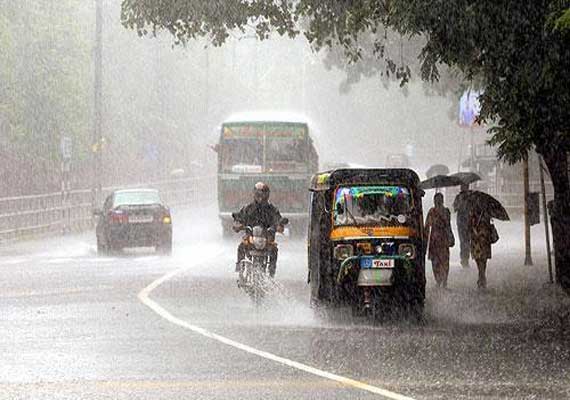 Surat: At least 45 people died, 36 in Amreli district alone, as Gujarat experienced the fiercest entry of monsoon in recent years, on Wednesday.Â

Amreli district was the worst hit by the rain fury as 13 people died when two houses collapsed in Nani Vaghaniya village near Bagasara town. “Of the 13, seven are females that include few young girls,” said Pinakin Parmar, deputy superintendent of police, Amreli.Â

According to state flood control room, three persons died in Bhavnagar, two in Gondal and three in Surat. Official report states that 28 persons have died in rain-related incidents from June 1 to June 23.Â

Residents of Bagasara, famed for its gold-plated imitation jewellery, remained on the edge as the town was pounded by 636 mm rainfall in just 24 hours. National Disaster Response Force (NDRF) team rescued 85 stranded people in the town.Â

Indian Air Force (IAF) helicopters air lifted 44 people after their bus got stuck in flood water on a state highway near Amreli. This was the first time that an operation to airlift people was conducted in the first spell of monsoon. Rescue teams also found bodies of two persons, who were missing along with five others from the bus.Â

Thousands of people have also been stranded as heavy rains triggered flash floods in rivers in Amreli, Rajkot, Bhavnagar and Gir-Somnath districts. In Rajkot district, 4,121 people were shifted to safer locations from low-lying areas.Â

The death toll is only likely to increase as many people, who were swept away in flash floods, are reported to be missing.Â

Torrential rains also paralyzed south Gujarat that witnessed heavy rains accompanied by winds gusting up to 80 km/per hour. While a 42-year-old man was electrocuted in Kosambda village, a boy died after falling into a manhole near Althan garden in Surat city. In Valsad’s Narwad village, a man died in house collapse while another man died in Uchhal after a tree fell on him.Â

Twelve relief centres were opened in Surat as nearly 1,000 people living near two creeks were evacuated. Adding to the rain worries, electricity was snapped in large number of villages of south Gujarat.Â

Amid reports of damage, however, there was some good news too in Saurashtra. The dams that had hit rock bottom were brimming, much to the relief of water-starved people. In fact, Bhadar dam, the region’s biggest, is overflowing in just nine days of monsoon onset.Â