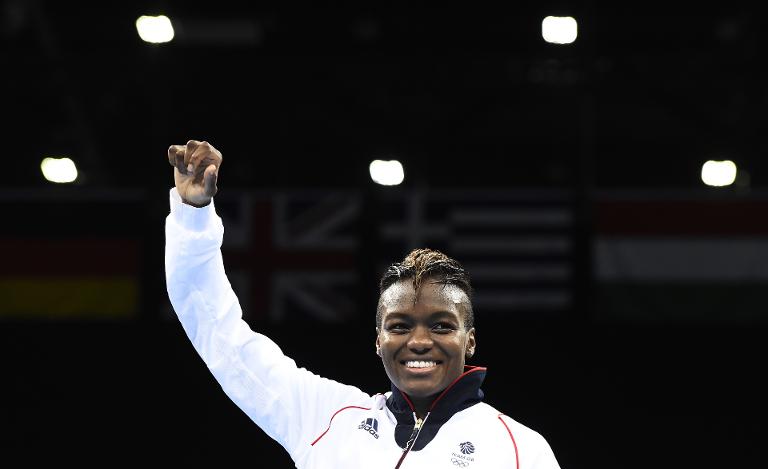 And afterwards she said she hoped her adored Doberman Dexter had watched her moment of triumph like he did when she won Olympic gold in 2012.

The 32-year-old, who has been the pathfinder for British women’s boxing, produced a performance worthy of her status as Olympic champion to defeat Poland’s Sandra Drabik by a majority decision.

The engaging pugilist is the second of the three female Olympic champions appearing in Baku to add European Games gold to their trophy cabinet, Jade Jones winning in taekwondo. Irish superstar boxer Katie Taylor fights her lightweight semi-final on Friday.

Adams, who at one point had to supplement the little she earned from boxing by acting as an extra in British soap operas such as Coronation Street, said she had been missing both Dexter and her other dog Bailey, a Pomeranian, the latter of whom usually travels everywhere with her.

However, she added she hoped Dexter had watched the title fight as he had done during the London Olympics when a television had been installed in his kennels and he had been photographed — with a toy meerkat in his mouth — apparently staring attentively at the screen.

“Yeah, it was (Dexter who watched me when he was just 10 months). I am hoping he watched this,” said Adams, who despite being Olympic champion will still have to qualify in order to defend her title in Rio.

Adams, whose only blot on her list of achievements is never winning the world crown, having to make do with two silvers, said it was great to have won the title after a difficult year.

She spent some of it recovering from shoulder surgery and also had all her kit, including some of her Olympic memorabilia, stolen.

“I have trained really hard for these European Games,” said Adams, whose bout was watched by an animated-looking Azerbaijan president Ilham Aliyev.

“I rate this title very highly. I have had a rocky start to the year, with the robbery. I just wanted to show everybody what I am about. That I am here to stay. I am like a â€˜comeback kid’ — you can never keep me down for long.”

Adams, who won the Commonwealth Games title last year, said the sense of continually setting benchmarks for British boxing gave her a great sense of pride.

“I feel fantastic, absolutely over the moon. I can’t believe I am bringing home another piece of history to Great Britain,” said Adams.

“It’s an amazing feeling. It is definitely a lot of motivation for me as well. It’s great to be able to create history all the time. I can give Britain something to look up to.

“That is more than enough motivation for me. And another little notch on to my legacy as well.

“I have improved since the Olympic Games and I am going to get bigger, better, stronger and faster on the road to Rio.”

Adams grinned broadly when asked whether it was great to still be top dog.

“This is absolutely wicked,” said Adams.

“I can’t believe it. I would like to say thank you to everyone that has supported me, the team, my mum, my brother, all my friends and family. They have all helped me to where I am today. I haven’t done it alone.”