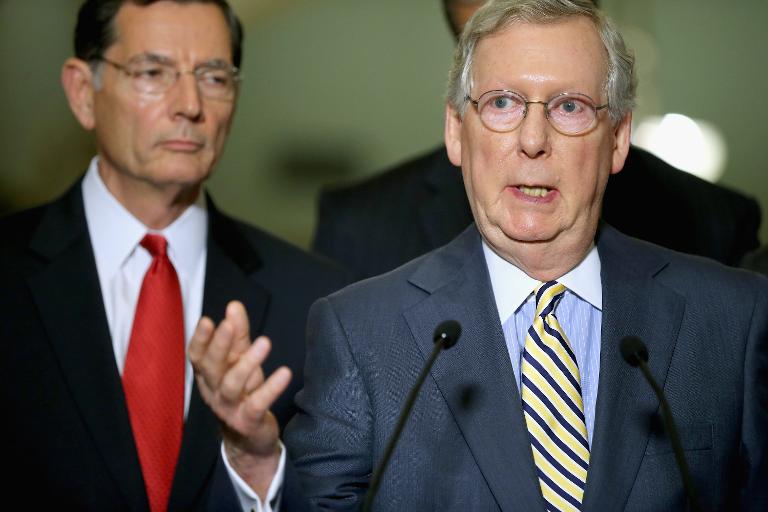 After weeks of legislative clashes Congress handed US President Barack Obama a major policy victory Wednesday, giving him authority to rapidly conclude a Pacific trade accord vehemently opposed by many in his party.

Bucking political tradition, the Democratic president relied on his Republican rivals to help realize the top economic priority of his second term: creating a 12-nation trans-Pacific free-trade area aimed at opening new markets for US exports in countries like Japan, Chile, Australia and Vietnam.

Obama’s own party has rebelled, worried about a repeat of the 1990s North American Free Trade Agreement, which led to large numbers of manufacturing jobs going to Mexico, where labor costs were dramatically lower.

But after a major trade package including so-called trade promotion authority (TPA) stalled in Congress this month, the White House and Republican leaders secured the necessary votes to advance at least the TPA measure.

The Senate voted 60 to 38, with 15 pro-trade Democrats joining all but five Republicans to approve the measure.

TPA expands Obama’s powers to negotiate the Trans-Pacific Partnership and other trade deals and present them to Congress for an up-or-down vote, without lawmakers able to pick apart the accord.

The TAA measure still requires passage by the House of Representatives, where a vote could come as early as Thursday.

The White House has signalled it wants both bills on the president’s desk.

“Achieving this positive outcome was never going to be easy but it proves that the power of a good idea, no matter where it comes from, can win out over the stasis of gridlock,” he said.

Last week the House narrowly passed TPA, which would remain valid until 2021, despite furious opposition by most Democrats.

The resistance to the trade pact comes mainly from traditional Democratic allies: organized labor, environmental groups and human rights organizations, many of whom warn it could trigger a “race to the bottom” on wages and jeopardize environmental and rights standards.

The mechanism for resolving disputes between states and multinational corporations is also a major sticking point in the negotiations with Brussels as the United States and European nations hash out a huge transatlantic trade deal.

“This body should not give up its authority to amend trade agreements, should not pave the way for a trade deal that looks like it’s going to be more of the same: corporate handouts, worker sellouts,” Senator Sherrod Brown, who helped lead the charge against TPA, warned colleagues.

Fast-track authority is not new. Every president in the last 40 years has used it and it will allow Obama to guarantee trading partners that the Trans-Pacific Partnership (TPP) will not be carved up in Congress.

Obama and “pro-trade” Democrats say a new TPA is a major improvement, notably through its 150 negotiating objectives including on intellectual property, labor and human rights, transparency and currency manipulation.

The administration will have to publish the full text of any trade accord 60 days before Congress can vote on it.

While President Clinton in 1993 promised that NAFTA would create a new global economic order, Obama insists that with the Pacific accord, the United States and its allies will be writing the new global trade rules, rather than China.

Top House Democrat Nancy Pelosi, an Obama ally who defied him, said the fight for working families was not over.

“Now our focus must be on the Trans-Pacific Partnership and House Democrats will be shining a bright light on the provisions of TPP as the negotiations proceed.”

The trade debate no doubt carries into the 2016 presidential campaign, particularly among Democrats.

Pressed by liberal independent Senator Bernie Sanders, who is fervently opposed to the trade deal, Democratic frontrunner Hillary Clinton suggested last week she would have voted against fast-track authority.

But she has refrained from denouncing TPP, an accord she once defended while secretary of state.