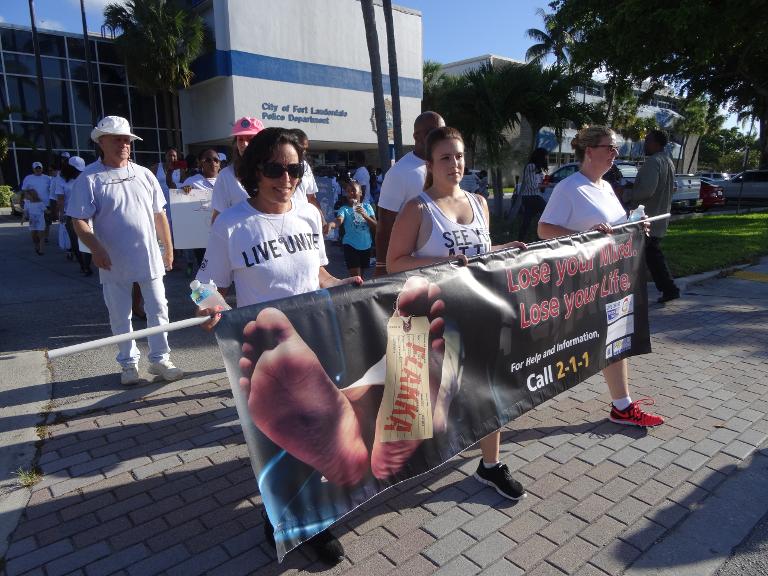 As drugs go, it’s dirt cheap, potent and deadly. And it creates surreal, pitiful scenes like this: a man running down the street buck naked, fleeing from imaginary dogs.

This addictive synthetic drug known on the streets as ‘flakka,’ or gravel, has killed dozens of people in Florida, and its popularity is spreading fast.

Also known as “5$ insanity” in allusion to the price of a dose — the formal chemical name is Alpha-PVP — the stuff is manufactured in China and is similar chemically to bath salts.

“Broward is much like ground zero for flakka or Alpha-PVP,” said Heather Clark of United Way, a charity that is trying to raise awareness of the dangers of the drug .

People generally smoke it, but it can also be injected intravenously or “vaped” — inhaled in vapor form.

“It truly is a very dangerous drug. It’s not recreational. It’s not something that you can take without adverse side effects,” Clark told AFP.

No one knows for certain, how flakka got its name. But the Spanish word ‘flaca’ is slang for girlfriend or beautiful girl.

The drug can be purchased over the Internet for 1,500 dollars a kilo (680 dollars a pound). By way of comparison a kilo of cocaine can cost 15 times that or more.

It is sent by mail from China in small quantities, which dealers then distribute, according to a report issued this month by state authorities on drug abuse in Broward County.

Chinese companies also advertise the drug openly on the Internet and will mail it directly to your home.

“This is a highly poisonous substance that may have been intentionally designed for longer lasting effects, and specifically to be more addictive, because that’s good for sales,” said James Hall, an epidemiologist at Nova Southeastern University who has studied the drug market in Florida for years.

Since the drug first appeared on the streets of the county in September, 34 people who took it have died. The drug has existed since the 1960s but its current incarnation, as Hall said, has been turbopowered to make addicts and money fast.

Hospital emergency rooms deal with at least 20 cases a day, said Hall, who is working with county authorities to compile data.

Authorities say many users mistakenly believe the drug is a mix of crack and heroin; it is neither. Others think it is like cocaine, but it is different and in many ways worse. Its serious negative effects are many; and authorities say users often are in behavioral crisis faster than it might take on other, costlier substances.

Using the drug can cause heart trouble, make people aggressive and paranoid, and in many cases psychotic.

A person’s body temperature can go up to 105 degrees Fahrenheit (40.5 centigrade) or even higher.

“The victims tear off their clothes, some think their body is on fire. They would run wild through the streets believing they are being chased by people or imaginary wild animals seeking to kill them,” said Hall.

So, bizarre cases are piling up in Broward County.

To wit: one man ran through his neighborhood naked, convinced he was being chased by a pack of German shepherds.

In March, another guy tried to kick in the door of a police station in Fort Lauderdale to escape what he perceived to be an attacker.

Days later, a third person died impaled on the fence outside that same police station while trying to scale the protective barrier.

And in May police in Fort Lauderdale shot and killed a man who was high on ‘flakka’ and holding his wife against her will with a knife.

However, many other cases that are less spectacular but just as devastating do not make the news.

Java Jackson, 26, used flakka on May 25 and died in a matter of hours in the hospital, his aunt Rose Waters said during a march last week in Fort Lauderdale.

“This drug is so easy to get. It’s so cheap, that’s what makes it I guess appealing to a lot of people. But it is more deadly than anything else that’s out there,” said Waters, who is 57.

Because of its low price the drug has mainly hit poor or vulnerable people like the homeless, said Dana Swisher of the Fort Lauderdale police.

The drug has also fit into distribution lines for other similar drugs that already existed in Broward County. This helps explain its ready availability in the county.

And while the authorities keep trying to cut off distribution routes, they warn of a cycle that repeats itself: when one designer drug begins to come under control, another appears to take its place.

“Last year it was Molly, now it’s called flakka. And who knows what it will be called next,” said A.D. Wright, head of the DEA office in Miami. Molly is a drug popular in the club scene.

“These are only street terms, and these drugs can contain anything. The users are allowing themselves to be utilized as guinea pigs,” Wright said after the arrest last week of three people on charges of selling the latest designer drug.