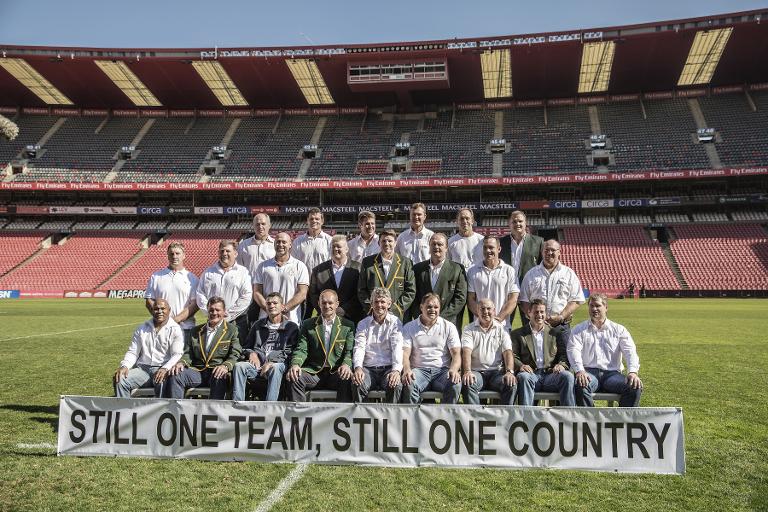 South Africa celebrated Wednesday winning the 1995 Rugby World Cup, and a star of that team predicted the Springboks can lift the trophy again this year in England.

Joel Stransky slotted the extra-time drop-goal that delivered a 15-12 triumph over the New Zealand All Blacks on June 24 1995 before a Johannesburg crowd including then President Nelson Mandela.

Stransky was among the survivors of that team who gathered at Ellis Park on a warm sunny southern hemisphere winter afternoon to remember the first of two Springbok World Cup titles.

Mandela played a key role in the triumph by publicly backing the Springboks, a team viewed by the black majority of South Africans as a symbol of apartheid.

Mandela passed away in late 2013 aged 95 and Christie and Kruger succumbed to cancer many years before.

“We proudly celebrate this day as a rugby family because the team helped Nelson Mandela unite a country.

“It was a moment that astonished a nation and provided one of the foundation stones for the country we were to become.”

Stransky, now a pundit for Johannesburg-based pan-African sports channel SuperSport, is upbeat about another green-and-gold World Cup triumph this October.

“I think the Springboks will win the World Cup,” he told reporters.

“Critics say it is an old team, but it is a very experienced team.

“A few youngsters and a couple of real match-winners can turn a game.

“We can come away with the title — it is certainly possible.”

Francois Pienaar, a flanker and skipper of the 1995 team, was reluctant to predict the outcome of the 2015 World Cup.

“I am just an old has-been,” he quipped. “I just enjoy the game.

“It is shaping up to be one of the most fiercely contested tournaments — the 2015 Six Nations was one of the best I have seen.

“England will put on a great show and it will be the biggest Rugby World Cup so far.”

Despite home advantage, the Springboks were not the 1995 favourites, with poor build-up results, coaching changes and selection uncertainties.

But in Mandela, whose ANC party had swept to victory in the first multiracial South African elections during 1994, the Springboks had a master motivator.

He regularly called Pienaar, visited the team, and attended the opening match in which the Springboks defeated the Australian Wallabies and the final.

“Nelson, Nelson, Nelson,” chanted the capacity 60,000-plus crowd as he walked on to the pitch wearing a replica of the No. 6 Pienaar jersey and a Springboks cap.

And the match was won six minutes from the end of extra-time when Van der Westhuizen passed to Stransky after a scrum, and the oval ball sailed between the posts.

Mandela handed the trophy to Pienaar and said: “Thank you, Francois, for what you have done.”

Pienaar replied: “No, Mr Mandela, thank you for what you have done.”