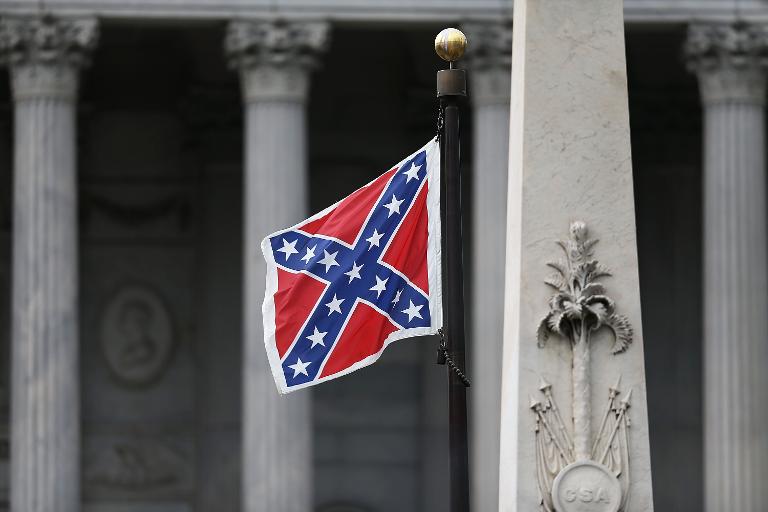 Walmart and Amazon will no longer stock merchandise bearing the Confederate flag after the Charleston church massacre, in a growing movement against what critics say is a symbol of racism in the American South.

The retail giants were joined by eBay, Sears and Kmart and follows calls from South Carolina state governor Nikki Haley to remove the controversial flag from the grounds of the state capital following protests at the weekend.

Civil rights activists have long pushed for the flag to be removed from official use and the debate has returned to the spotlight since last week’s killings by suspected white supremacist gunman Dylan Roof, who appears in photos with the banner on a website linked to his name.

Unemployed loner Roof has been charged with nine counts of murder. All his victims were black.

The battle flag — a red rectangle marked with a blue cross embedded with white stars — is a powerful symbol of the pro-slavery South during the American Civil War. It is seen by some as a symbol of Southern US heritage, but by others as a racist relic of a bygone era.

Walmart, the world’s largest retailer and a staple in the South, said it would remove Confederate flag merchandise from its shelves as a matter of respect.

“We never want to offend anyone with the products that we offer,” Walmart spokesman Brian Nick said in a statement.

“We have taken steps to remove all items promoting the Confederate flag from our assortment, whether in our stores or on our website.”

The company’s CEO Doug McMillon said in a television interview that he had not even known that Walmart carried Confederate flag merchandise.

“We just don’t want to sell products that make anyone feel uncomfortable and we felt like that was the case,” he said.

“This was the right thing to do.”

An Amazon company official confirmed to AFP it would remove Confederate flag paraphernalia from its site, but several related items remained in its online store Tuesday.

Meanwhile, US news reports said that Civil War enthusiasts — apparently worried that they no longer will be able to easily get their hands on Confederate symbols — have been snapping up flags and other Confederate flag-adorned merchandise online.

Prior to the announcement by the company official, sales of Amazon’s most popular Confederate flags rocketed by more than 3,600 percent in 24 hours, according to the online retailer’s website.

Religious leaders, local officials and politicians — including 2016 Democratic presidential frontrunner Hillary Clinton — joined calls for the removal of the flag from the grounds of South Carolina’s state capital Columbia.

Clinton said the flag was a “symbol of our nation’s racist past that has no place in our nation’s present or future.”

“Today Amazon, eBay and Sears followed suit, and I urge all sellers to do the very same,” she said at a community meeting in Florissant, Missouri, not far from where police shot dead an unarmed black teenager last year.

Last Wednesday’s attack at Emanuel church in Charleston, South Carolina was the worst on a US place of worship in decades and comes at a time of revived racial tensions in many parts of the United States.

A website linked to Roof features a rambling manifesto apparently written by him prior to the killings calling for a race war and features several images of him with guns, burning the US flag and holding the Confederate banner.

His arrest warrant alleged he shot the six women and three men, aged 26 through 87, multiple times and then stood over a survivor to make a “racially inflammatory” statement.

US President Barack Obama, who will deliver the eulogy at a funeral for Emanuel’s slain pastor Friday, has said the massacre proves that the United States has yet to exorcise its racist demons.