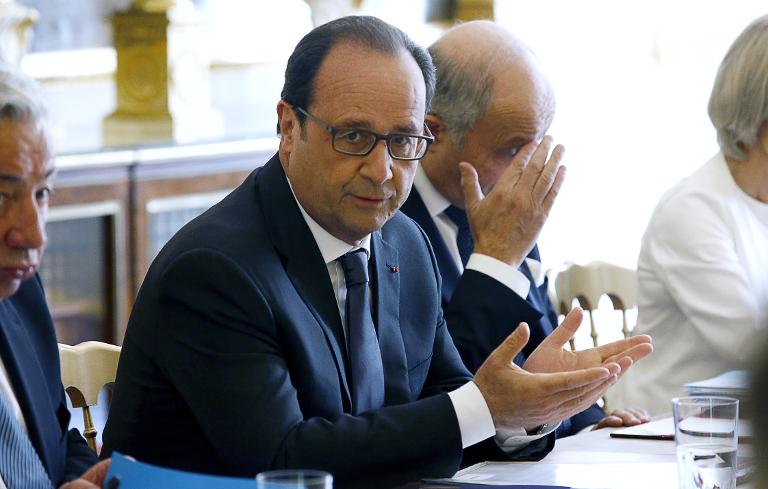 The United States must “do everything in its power” to repair relations after reports emerged that it spied on French President Francois Hollande and two of his predecessors, Prime Minister Manuel Valls said Wednesday.

“The US should recognise not only the danger that such actions represent for our freedom, but should also do everything in its power — and quickly — to repair the damage they have done to relations… between the United States and France,” Valls told parliament.

France earlier summoned the US ambassador to complain about the “unacceptable” spying that was apparently revealed in leaked documents.

Hollande was due to discuss the documents released by WikiLeaks with US President Barack Obama in the coming hours.

France “will not tolerate any acts that threaten its security” the presidency said, after a meeting between Hollande and his top intelligence officials and cabinet ministers.

The documents — labelled “Top Secret” and appearing to reveal spying on Jacques Chirac, Nicolas Sarkozy and Hollande from 2006 to 2012 — were published by WikiLeaks in partnership with French newspaper Liberation and the Mediapart website.

The leak coincides with a vote later on Wednesday in the French parliament on a controversial new law granting the state sweeping powers to spy on its citizens.

The White House said it was not targeting Hollande’s communications and will not do so in the future, but it did not comment on past activities.

“We are not targeting and will not target the communications of President Hollande,” said National Security Council spokesman Ned Price late Tuesday, calling the US partnership with France “indispensable”.

Hollande’s office recalled US promises in late 2013 not to spy on French leaders following accusations that the US National Security Agency (NSA) had wiretapped German Chancellor Angela Merkel.

“Commitments were made by the US authorities,” the Elysee Palace said in a statement. “They must be remembered and strictly respected.”

The leaked documents include five from the NSA, the most recent dated May 22, 2012, just days after Hollande took office.

It claims Hollande “approved holding secret meetings in Paris to discuss the eurozone crisis, particularly the consequences of a Greek exit from the eurozone”.

It also says Hollande believed after talks with German Chancellor Angela Merkel that she “had given up (on Greece) and was unwilling to budge”.

“This made Hollande very worried for Greece and the Greek people, who might react by voting for an extremist party,” according to the document.

The same file also alleges that the French leader went behind Merkel’s back to schedule meetings in Paris with members of the Social Democrats — Germany’s main opposition party at the time.

Another document, dated 2008, was titled “Sarkozy sees himself as only one who can resolve the world financial crisis”, and said the former French president “blamed many of the current economic problems on mistakes made by the US government, but believes that Washington is now heeding some of his advice”.

One leak describes Sarkozy’s frustration at US espionage, saying the “main sticking point” in achieving greater intelligence cooperation “is the US desire to continue spying on France”.

Chirac’s choice for appointments at the United Nations was the subject of a file dated 2006. In that same document, then foreign minister Philippe Douste-Blazy was described as someone who has the “propensity… for making ill-timed or inaccurate remarks”.

In Washington, NSC spokesman Price echoed a statement issued earlier Tuesday by the security council, saying: “We do not conduct any foreign intelligence surveillance activities unless there is a specific and validated national security purpose. This applies to ordinary citizens and world leaders alike.”

France’s ambassador to the US, Gerard Araud, appeared to downplay the revelations, saying on Twitter: “Every diplomat lives with the certainty that their communications are listened to, and not by just one country. Real world.”

Important, confidential discussions are held by “secure methods of communication”, he continued, but “all our other devices are, by definition, listened to”.

WikiLeaks founder Julian Assange said French citizens had a right to know their government was “subject to hostile surveillance from a supposed ally”, and promised more “timely and important” revelations soon.

British newspaper The Guardian reported at the time that the NSA had listened in on the phone calls of 35 world leaders. According to various reports they include the leaders of France, Mexico and Brazil.

While it was not known then if Hollande’s phone was bugged, the French leader had said on a visit in Washington in February 2014 that the two allies had resolved their differences over American digital eavesdropping.

“Mutual trust has been restored,” Hollande said then.