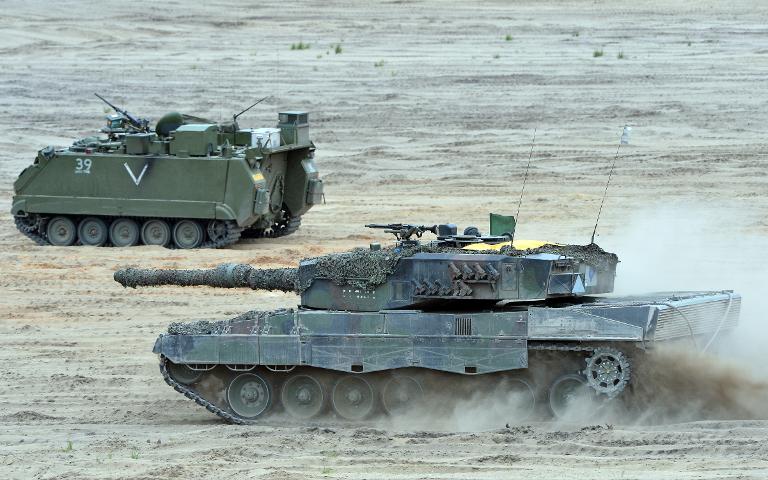 The US will deploy heavy weapons in central and eastern Europe for the first time, Washington said Tuesday, in the midst of the worst stand-off between Russia and the West since the Cold War, triggered by the crisis in Ukraine.

“We will temporarily stage one armoured brigade combat team’s vehicles and associated equipment in countries in central and eastern Europe,” US Defence Secretary Ashton Carter said at a joint press conference with three Baltic defence ministers on the eve of NATO ministerial talks.

“This pre-positioned European activity set includes tanks, infantry fighting vehicles, artillery,” he said, adding that Estonia, Lithuania, Latvia, Bulgaria, Romania and Poland had “agreed to host company- to battalion-sized elements of this equipment” which would be “moved around the region for training and exercises.”

“While we do not seek a cold, let alone a hot war with Russia, we will defend our allies,” Carter added.

The Pentagon said the deployment of 250 heavy weaponry would include 90 Abrams tanks, 140 Bradley armoured vehicles, and 20 self-propelled howitzers.

“The American move sends a signal to Russia, US allies and other global powers that the US is a leading global military power able to counter Russian threats in the region — that it’s not a power in decline,” Marcin Terlikowski, a security analyst with the Polish Institute of International Affairs (PISM), told AFP.

The US announcement comes as NATO vowed Monday to step up its military presence in eastern Europe against the backdrop of the conflict in Ukraine.

Ukrainian rebels on Tuesday accused government forces of killing three civilians in attacks launched hours before the start of crunch talks in Paris on ways to halt the 15-month separatist war.

Kiev’s Western-backed military command meanwhile reported the death of one soldier and accused the pro-Russian rebels of heavy mortar and artillery fire.

The ongoing bloodshed underscores a repeated failure by diplomats to find a way out of a crisis that has killed 6,500 people in a little over a year.

“Without a ceasefire, all the other factors won’t come together,” warned the minister ahead of talks with his French, Russian and Ukrainian counterparts.

In response to the conflict, and Russia’s 2014 annexation of Crimea from Ukraine, NATO is flexing its muscles in Poland and the Baltic states.

The alliance is carrying out a series of drills focused on its new spearhead force, which is designed to boost security on the group’s eastern flank.

Attending exercises in Poland last week, NATO head Jens Stoltenberg said the alliance was “implementing the biggest reinforcement of our collective defences since the end of the Cold War”.

Reports about US plans to deploy heavy weapons to eastern Europe had prompted Moscow to announce that it would in turn expand its nuclear arsenal.

Putin accused the US-led alliance of “coming to our borders”.

NATO member Poland gave a pessimistic assessment of the situation last week, saying the post-Cold War peace in Europe was “now over” — alluding to both the Ukraine conflict and terrorism.

Under Moscow’s thumb in Soviet times, the three Baltic states last month asked NATO to deploy several thousand permanent troops in their region as a deterrent to Russia.

But some European NATO allies, like Germany, have been sceptical about any substantial permanent deployment, saying it could breach a 1997 agreement between NATO and Russia.

That agreement however does not appear to rule out temporary NATO troop rotations or pre-positioning alliance equipment along its eastern flank.

Speaking to journalists in Brussels on Tuesday, US ambassador to NATO Douglas Lute explained that Washington would only be deploying heavy equipment, without troops.

“The tanks are empty, the â€¦ vehicles are empty, and will be parked, stored and maintained in training areas across the six Eastern most allies for training purposes,” Lute said.

“Then the soldiers, on exercise after exercise, will be flown in .. they’ll exercise with their allies.”

Defence ministers from NATO’s 28 member states will meet in Brussels on Wednesday to further discuss ways of meeting security challenges.